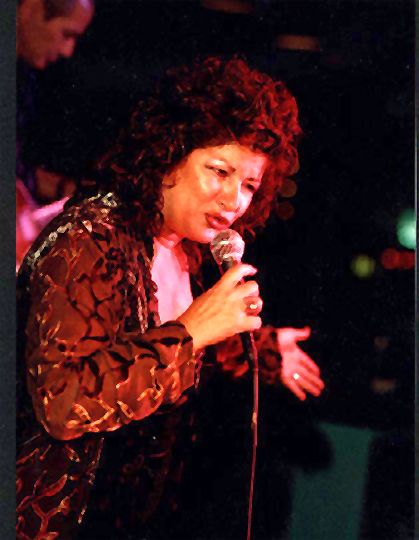 “Artist of the Year”

We don’t give away a lot of awards here at DGT. This is due to the fact that we talk to hundreds of artists every year and we try to remain un-biased even if we really dig someone’s work. But each year a few are so outstanding that we just can’t ignore their contribution to music and to the arts. And for that reason, Kal David, with Miss Lauri Bono with their totally insane smash album, “Living The Dream” become our Top Artist(s) of the entire year!

To say that Kal David is just a great Blues Guitarist would be a shame, although he is. But then again other Blues guitarists don’t even come close to the wide range of his styles, the colors on his palette if you will. A short while after the fuzzy glow of the British Invasion had subsided a bit, and being a guitar player myself I immediately started listening to BB King, Muddy and one particular English fellow named John Mayall and his band, the Blues Breakers as I was seeking a higher meaning and more depth, feeling, and that elusive element known as “soul “. The Blues Breakers were home to many great guitar players including Jimi Page and Eric Clapton and one very young and talented Kal David, who was with the band touring and making records for some three years. Knowing that tidbit of history will make most reviewers pen a pretty convincing argument that Mr. David is indeed a fine and experienced Blues Guitarist, which as I said earlier – he is. But they’d miss his depth and the mark by a mile!

Kal David is a singer. He is a true vocalist, a professional with way above average vocal chops to be called a Blues singer. Few of the known men and women in the Blues really have much of a great voice at all with certain exceptions. And if asked, they would probably never dispute that claim either. For example, the now very rich and famous icon of Blues-Pop, Sir Eric Clapton who came from the same school of knocks “across the pond “as most of the American Blues legends had done and had to fight his own long battle upward to stardom, but when you talk to people that you think should know their music, they just go on about the old days of Cream and Yardbirds with no talk of the great songs he wrote and sang and earned Grammys on. He too was passed over as a singer by the critics and the media but I’ve always disagreed with that nonsense. Same is true for Kal David, as when I talked to many of my Blues connections and they speak about his guitar playing, saying how great he was on the guitar years back with little mention about his singing and original songs. Now though, I have re-discovered just what a total “all-around “musician he is and I feel he deserves all the same respect as Sir Eric is accustomed to. And I know that’s a big pill to swallow for some of you but it is this writers’ opinion that the world is about to wake up to a living legend of music, not just the Blues. And then, this is where the road starts to really divide and get interesting….

Miss Lauri Bono, music partner for many years to Mr. David is fully featured in this new record of theirs called “ Living The Dream “ and she is one of the most dynamic and amazing female vocalists I’ve heard in decades! You know how it is, with all these reality Talent shows on TV these days, with the seasonal new crop and even some old bloods who come on to compete with their trademark vocal “ gymnastics. These are the girls who sing a hundred notes a measure just to show that they heard Aretha records and they have something to prove, never knowing that as in the guitar like Kal knows how to play, less is always more. Lauri sings in a way that she can sound like soft velvet or turn on the gravel and guts – raising the old goose bumps on your arm and then, she pulls you right back into another soft passage of her angelic flute- like whispers of melody and you just say whoa…..and it’s like something spiritual just happened in front of the whole church-audience….yep, someone got saved! Now I don’t know a great deal about Miss Lauri and her own up-bringing or where she studied music but I know it is a gift. A gift that she has chosen to share with Kal David as they traverse the globe making records playing concerts, television shows and major VIP events. Most acts that consist of two great singers will usually take turns in the spot light but rarely an act like Peaches and Herb, Roberta Flack and Donny Hathaway, Barry Gibb and Barbara Streisand – all seventies legends I might add – comes along and makes music history together singing as a real duet. Music, at least Pop and Country music has for the most part missed this element of the male-female duets and the power of two to tell a story. It worked well for Kenny and Dolly on “Islands In The Stream” and also Lionel and Diana with their “Endless Love “, but producers seem to focus differently these days on developing one icon at a time, one song of the week and one flavor of the month than to foster and market the passion and the power of a duet, as evidenced in this incredible new record by Kal David and Lauri Bono and released on Crytone Records.

We’ve been blessed with this magazine because of all the amazing talent and rising stars we’ve been able to meet, interview and review. And there have been hundreds of talented bands and singer-songwriters! There have been Blues artists who are really great at what they do and some of them were already major stars when we met them, and many were on their way to the top but not one of them were anywhere like or on the level of Kal David and Miss Lauri here on their brand new record, “ Living The Dream “ . There’s something so very special about the chemistry between the notes. You can’t just say “Oh Kal is the star here and write a review about him because they are a TEAM. And a team works synergistically toward the greater good of the total performance, the compete record. The members of the team don’t think they are better than the other; they co-exist because of and for each other. Perfect Harmony.

So we give this award whole-heartedly but not lightly. Kal David and Miss Lauri Bono are the most deserving Artists of the year but if we gave awards for best male-female vocal performance, they would win that one too! Every track of Living The Dream is great and I’ve played it over and over for a month now in my car whenever I travel, so I don’t have a favorite because they are all, forgive the pun….damn good tunes !