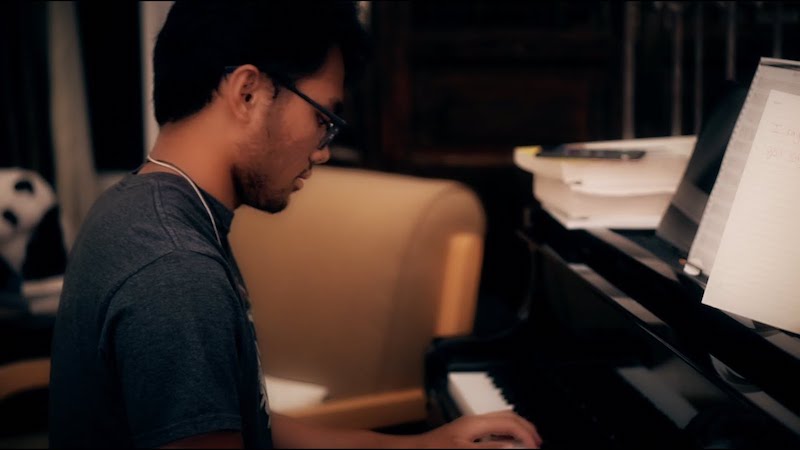 I am a nineteen-year-old Filipino American musician. A California native, born and raised in Valencia. The Silos name in the Philippines are pioneer filmmakers and composers dating back to the early 1920’s. My parents are both musicians. I grew up surrounded by musicians and the music studios were my playground.

Growing up, my parents exposed me to music, movies and sports. Sports played a big part of my younger years.

Although I focused a lot on sports growing up (10 years of youth hockey and focusing on Olympic recurve archery for the last 5 years) I always turned to music every chance I get.

Currently, I am a member of the Philippine National Olympic Recurve Archery Team. I represent them in all World tournaments. I am scheduled to participate in the Olympic qualifier in France this coming June and compete to get a spot for the Tokyo Olympics.

I am also working on a new music album called, “Infinity, In Between Shots.” I am really proud and excited to share my new work. I feel that my writing is more personal in these new songs.

Right now, my biggest challenge has nothing to do with music. I am in the middle of my second gap year (from the Los Angeles College of Music, in Pasadena) I took a gap year last year to prepare for the 2020 Olympics. Since that was postponed for this year, I have to continue to train for it, and postpone college one more year. Training for the Olympics is a full-time job that really tries a person’s resolve and resilience.

But, even with the Olympics being the main focus right now, I allocate time to attend some online music classes and continue writing songs. I train 6-8 hours a day in archery, 6 days a week; and for all the other time, I am either writing songs, collaborating with other musicians, producing my music, shooting music videos, attending online music theory classes, or working on my piano playing and vocal techniques. It is a hectic schedule, but it is a challenge I willingly take on. I really have a lot of fun doing it!

I am a singer/songwriter who is currently an athlete in training for the Olympics.

For the past two years, I have written, produced and recorded at least twenty-four songs. I also have quite a bit more songs that I have written but not recorded. I also shot and released twelve official music videos (my first video release, “Flyin’” had over 200k views) on my YouTube Channel. www.silos.tv

There’s no better time to be a musician than right now. With technology, anyone who really pursues it, can record and produce their own music. Honing one’s talents is just a click away. There are so many master classes to learn from, mentors to help those who are interested and willing to work. There are so many avenues. My career goal is not just to be a singer/songwriter. One of my goals is to write for other artists. Another goal is to have my music be used in commercials, television or movie soundtracks. The possibilities are limitless.

Riley’s writing partner, Mark Spiro, has represented over 100 million records sold worldwide. He is an established award winning producer, recording artist, and accomplished musician, with a career that spans over two decades. Among his many accomplishments are 45 gold and platinum records, and six solo albums.

More About Riley Silos at: rileysilos.webnode.com/music/