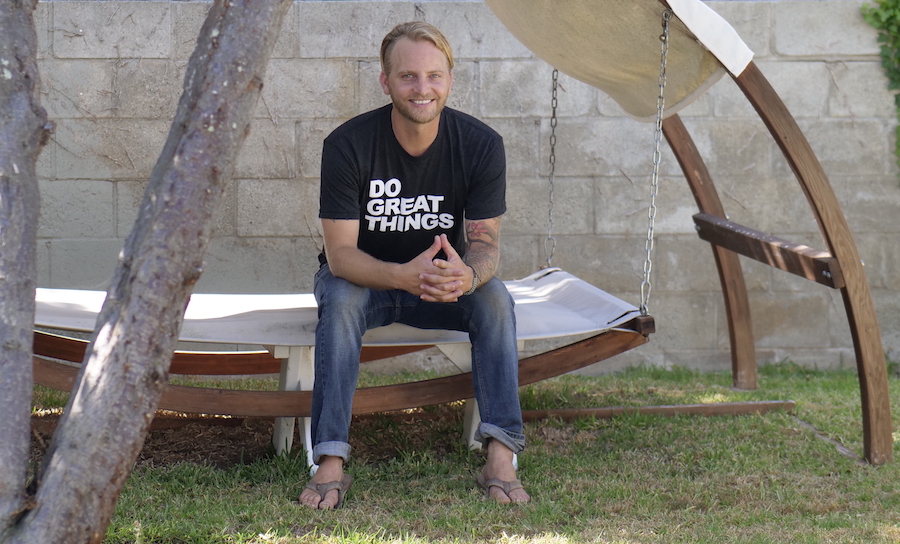 Evan grew up as the quintessential California kid, living in Valley Center and traveling to the beach at any opportunity he was able, in order to surf and immerse himself in the ocean.  Throughout his childhood, he developed a deep appreciation for the beauty of the natural world and thrived in all aspects of outdoor life. At a very young age, his family discovered that he possessed a highly developed artistic aptitude for creativity. He began expressing it through various forms of media. Painting with vibrant color combinations became his primary vehicle of creative expression. He was encouraged to pursue this talent by attending various schools of art throughout his early education.

As Evan grew, he found himself continually inspired by beauty, creativity, nature, humanity, all of which intrigued his gypsy-like soul. In his 20s, his wanderlust lured him on many journeys and adventures which shaped the man he is today.  While on the road, he developed a new passion as a culinary luminary, which would define his next evolution. Evan discovered that creating food was very similar to creating art, and began to use cuisine as his artistic palette. He honed his skills by studying with, and observing master chefs in action. Evan soon learned how to create unique delectable, healthful, and beautifully intricate dishes, influenced by global cuisine. But one of the most important culinary techniques he developed is something he labels as “epigenetic fusion.” Very similar to Dr. Masura Emoto’s studies of changing the structure of water molecules by nurturing them with positive speech, Evan infuses his culinary creations with his love and positive energy, which in turn is consumed by his guests, ultimately changing their personal inner energetic vibrations. Not only did Evan work as a chef in traditional kitchens, but he also organized underground supper clubs, such as Black Label Table. This format gave him more freedom to create unique dining endeavors, venturing outside the box of the traditional restaurant experience.

Eventually, his travels brought him full circle, back to his roots in Valley Center, where he easily settled into his new role as Executive Chef and Creative Director of Keys Creek Lavender Farm. Not only did he take on the responsibility of nourishing the guests with his excellent cuisine, but he was also in charge of designing and constructing the magical environment experienced by the guests on the Farm. Keys Creek is a rural destination for retreat events, such as yoga and spiritual journeys, so the energy of the space is a very important aspect of the venue. Similar to his cuisine, Evan was able to utilize his artistic creativity and construction skills to infuse the entire space with magic and positive vibes, from the meditative Crystal Labyrinth to the blissful lighting and whimsical chandeliers in the trees. Every guest comes away from the Lavender Farm with a deep sense of well-being and inspiration.

The newest portion of Evan’s evolvement began with a cup of tea, and an inspirational quote advising him to “be the light and spread the light.”  This encounter planted the seed for the concept of “lighthouse.” Through a series of serendipitous connections with like-minded individuals and collaboration with inspirational groups, such as Evo Room, the ideology of “lighthouse” began to materialize. Lighthouse organizes wellness retreat experiences at amazing unique venues that offer not only relaxation, nutrition, and self-care, but the opportunity for deep inner work, participation in playful and inspiring team building activities to connect like-minded individuals and build stronger communication skills. The ultimate culmination of these experiences is to offer inspiration and opportunities to activate the “flow state” and take these lessons from the retreat experience and into the homes and communities of the guests, making an impactful difference in the world. The next step of this journey is to continue to develop and manifest the inspiration of this project and share the light of creativity and intentional living on a global scale.

More About Evan Rumble and Kokoa at www.kokoapath.com