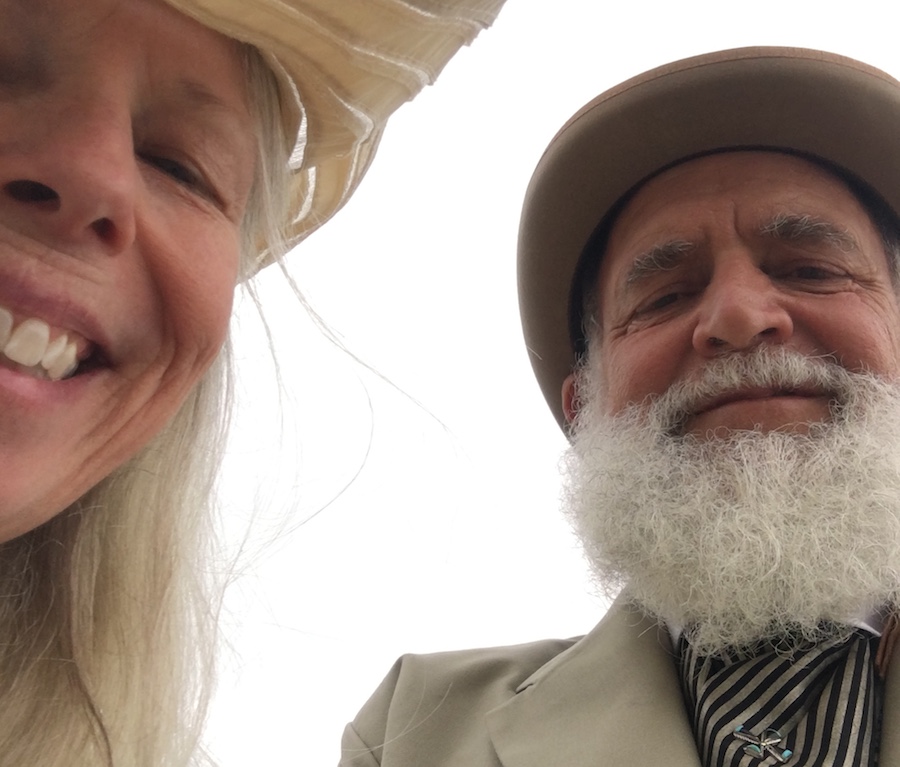 Lisa Salloux was born into an entire family who plays music. She was brought up on classical, blues and bluegrass while playing piano, mandolin, guitar and bass. She’s been writing and performing original tunes since she was a teenager and currently is engaged in a couple of projects in Los Angeles, an all female string band called Sugar In The Gourd, and Killing Cassanova, a ‘swampytonk’ band that Doug is also a member. “Playing bluegrass music is absolutely re-juvenating and re-kindles a spirit that loves to dance on the land.”

Doug Funkhouser is a singer song writer and has played bluegrass banjo and guitar for over forty years. He is currently a member of The Henry Ridge Ramblers and Killing Cassanova. He has developed his own style of progressive and three finger banjo playing based on the work of Earl Scruggs. “You can’t help responding to the honesty of bluegrass, it’s a music that finds its way deep into your soul.”

Doug Funkhouser and Lisa Salloux as Heads of Industry in Textiles

CEO, Founder, Artist
He comes to the printed fabric world naturally. From the scenic arts to the decorative arts, his disciplines have informed him to create this fine handcrafted line. The evolution of the line is a reflection of the master finishes and custom murals that grace his portfolio.
Read more about Doug

Douglas has since developed le gracieux, his own line of hand-crafted hemp textiles. He borrowed the term from an essay by French author Montesquieu, in which he discusses the many degrees of pleasure contained within the arts. le gracieux (the gracious) was listed among them, meaning “that which is refined and beautiful.” Douglas says, “It’s important for my textiles to possess an ageless sense of beauty and a hand softened by time.”

CFO, Director Marketing and Design
With a background in architectural design, Lisa comes to le gracieux to facilitate the exposure of Doug’s artistic intention behind the line. Formally educated at Laguna Beach School of Arts, her extensive travel pursuits and appreciation of invention make for a finely tuned partnership with le gracieux.