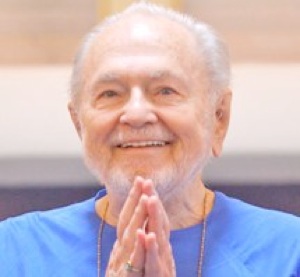 Swami Kriyananda is one of the world’s foremost experts on meditation, yoga, and spiritual practice. He has authored more than 140 books and composed over 400 pieces of music. Kriyananda is a member of the Club of Budapest, where he serves along with the Dalai Lama, Archbishop Desmond Tutu, Mikhail Gorbachev, Elie Wiesel, Jane Goodall, Peter Gabriel, and other leaders of the planetary evolution of consciousness. A prolific and internationally regarded author, speaker, accomplished composer, playwright, artist, and world-renowned spiritual teacher, Swami Kriyananda refers to himself simply as “a humble disciple” of the great spiritual leader Paramhansa Yogananda.

Our audience will have a rare and unique opportunity to bask in the wisdom of a revered spiritual leader seldom accessible to the public. Swami Kriyananda is the last still-teaching direct disciple of Paramhansa Yogananda–world famous spiritual leader and author of Autobiography of a Yogi. Swami Kriyananda will expound on the teachings of Yogananda. “There are times when a human being, though perhaps not remarkable in himself, encounters some extraordinary person or event that infuses his life with great meaning, ” recalls Kriyananda. “My own life was blessed with such an encounter in 1948. I met a great, God-known master whose constant vision was of eternity. His name was Paramhansa Yogananda.

He was from India, though it would be truer to say that his home was the whole world.” For the last four years of Yogananda’s life, the young disciple absorbed his guru’s teachings and wisdom, and committed his life to furthering the Master’s vision and message. Yogananda appointed him as head of the monastery, authorized him to teach in his name and to give initiation into Kriya Yoga, and entrusted him with the tasks of writing and developing what he called “world brotherhood colonies.” And for the last 60 years, Kriyananda has done just that. Kriyananda’s books and audios have sold more than 3.5 million copies worldwide and have been translated into 28 languages. He is the author of more than 140 books on a variety of topics, including leadership, education, creativity, and moral values. His bestselling titles include Awaken to Superconsciousness, God is for Everyone, Conversations with Yogananda, Meditation for Starters, The Art of Supportive Leadership, The New Path