Popular Shows
Home Archived How Aging Can Be Beautiful Ep651-2

How Aging Can Be Beautiful Ep651-2 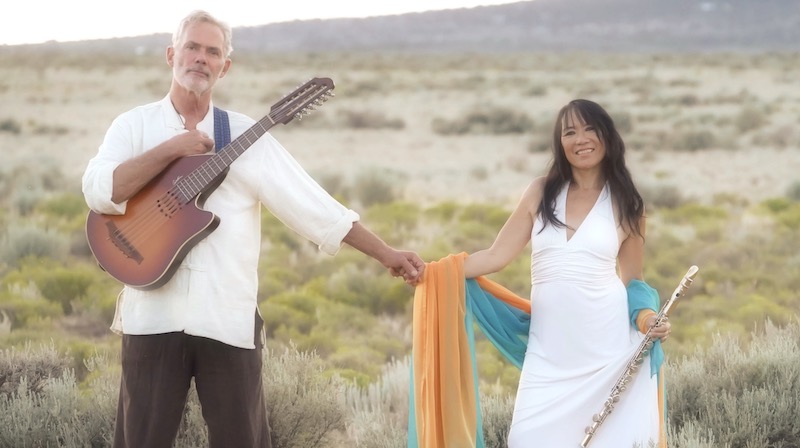 With Musical Guests, Instrumentalists, and Award Winning Recording Artists, Suzanne Teng and Gilbert Levy on The LIFE CHANGES Show Ep651 Titled, “How Aging Can Be Beautiful;” with Guest, Author of The Inner Work of Age: Shifting from Role to Soul, Retired Therapist, and Elder, Connie Zweig, Ph.D.

Their recordings have been licensed for hundreds of film, television, commercial and video productions and was featured on NBC’s America’s Got Talent. Appreciated for its sacred, relaxing and heart opening qualities, their works can be heard on numerous healing soundtracks and was chosen by the pharmaceutical company Genentech who created a CD with a compilation of their pieces that was distributed to over 50,000 cancer patients to aid in their recovery.

The Whole Life Timeswrites that they “lift the listener to a place where beauty, ecstasy and tranquility reside.”
Suzanne has been described by the Los Angeles Times  as a “brilliant flutist” who “plays music for the soul.”  Originally from Berkeley, California, she received her Master’s degree in music from Boston University’s School for the Arts and, after traveling across the globe, decided to further her passion for world music, pursuing her Ph.D. in ethnomusicology at UCLA where her focus was on music and healing.

Suzanne plays all the flutes from the western flute family as well as an extensive array of flutes from around the world including the Chinese dizi, bawu and hulusi, Turkish ney and zurna, Indonesian suling, panpipes, penny whistles, Native American flutes, ocarinas, the West African fulani, Egyptian reed mijwiz and Bulgarian dvoyanka.  Her flute playing can be heard on commercials for Kleenex, Dodge and Johnnie Walker, on hundreds of major and independent label albums, and on video game, film and television soundtracks.

She has performed on national television, including live performances on several of CBS’s Survivor finale shows, which were seen by over 70 million viewers.She is an endorsed artist for YAMAHA representing their alto and bass flutes and a widely respected educator who has sat on the Music Education panels for the National Endowment for the Arts for three years.

Gilbert was born and raised in New Orleans where he began playing drums at an early age and by his late teens was performing professionally in R&B bands in clubs on Bourbon Street and with jazz greats such as Wynton and Branford Marsalis. He moved to Los Angeles in his late 20’s and played pop music in numerous bands and on several major label recording projects before gravitating towards world drums.

He plays African and Middle Eastern hand percussion, the metal melodic Hang and Rav drums and has expanded his musical vocabulary on numerous stringed instruments such as the Turkish saz, African ngoni, bass dulcimer and hybrid guitar Inuk. He also uses his extraordinary technical expertise to engineer and mix their award-winning recordings. Teng & Levy also record and produce albums for others and have composed music for yoga and acupuncture DVDs and several films including  the documentaries “Raw for 30” and “Beirut Rising.”

Suzanne and Gilbert live in Santa Fe where they raise their teenage son Miles, two cats and a coop of chickens. They record their award-winning music at their home studio, Dragonfly Studios.

More About Suzanne Teng and Gilbert Levy at: mysticjourney.net/