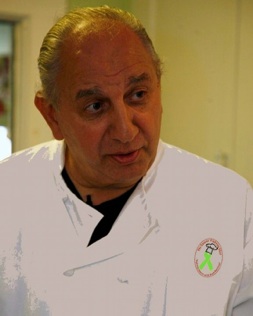 Though a Professional Chef for 20 years, Chef Richard has spent a life time learning the art of entertaining guests. At Mama Rose Restaurant, in California, Richard and his wife of 43 years, Elaine, served an abundant menu of “New Italian-American” food. (The Los Angeles Times chose the words “Over the Top” to describe the “Mama Rose Experience”.) As may be true of many Italian-Americans of his generation, Chef Richard’s first: kitchen job, at age 5, was at home, carrying freshly made ravioli from the kitchen to the bedroom, where they were laid out to dry. The large bed, the biggest flat surface in the house, covered with a white sheet, became the drying board for home made macaroni. The art of mozzarella shaping and sausage stuffing, sandwich and salad making were learned at a young age while working Saturdays at his Uncle Mario’s, Italian Deli, on Morris Park Avenue, in the Bronx.

Chef Richard’s mother, Mama Rose, was an excellent cook. She was his first inspiration and along with the inspiration of his grand parents, aunts and uncles, he has created a “New Italian-American Cuisine.” This dynamic cuisine combines the cooking of the tenement apartments of a hundred years ago, with the abundance of America and a century of revision. After 28 years in finance and system design, Chef Richard began his professional cooking career in 1988 by creating portion controlled entrees for patients at Elaine’s clinic, Changing Dimensions, which, in conjunction with local physicians, was a center to help people control their eating habits due to medical problem,., such as diabetes, obesity or cardiac rehabilitation. That lead him to take over the production of the “Bristol 300” line of low calorie products for Bristol Farms Stores. Eventually entrees and other partially prepared food items were shipped to other stores, restaurants and medical clinics. And for five years he supplied Trader Joe’s stores with fresh Italian entrees.

In 1995 Richard and Elaine decided to open a restaurant. Their production facility was a closed restaurant so they only needed to clear out a storage room, create a menu and Mama Rose was open for business. Chef Richard manned the kitchen while Elaine managed the front end. With only four tables, no sign and open on Friday and Saturday nights only, they were now “Restauranteurs.” The Restaurant had been given many awards for excellence. There were numerous positive reviews and inclusions in many dining guides, including the world wide Zagat Guide. Mama Rose Restaurant closed in 2005. Chef Richard began a career in show business.

With the help of noted Italian singer Filippo Voltaggio created “The Filippo and the Chef Show.” Chef Richard demonstrated Italian cooking while Filippo sang, interviewed celebrity guests and added fun to the cooking experience. The show was performed at venues all over the United States and grew into a radio show. Unfortunately after 3 years Chef Richard had to curtail his activity while he battled Hodgkins Lymphoma. Filippo moved on to radio hosting of his own show “Life Changes with Filippo.” Chef Richard has fought off his cancer and after 2 years of treatment is cancer free. While fighting the fight he decided to use his skills and become “The Cancer Fighting Chef.

He currently operates a web site, thecancerfightingchef.com and is the founder of the organization “The Cancer Fighting Chef.” Chef Richard is dedicated to help anyone who wants to, fight cancer with good nutrition. He again performs demonstration shows to showcase nutritious cancer fighting recipes. Chef Richard has completed his first cook book “The Mama Rose Cook Book.” He is currently working on a book of Italian-American recipes, “The Cancer Fighting Chef – Cooks Italian. He is lecturing and demonstrating recipes about cancer fighting foods. Awards: Southern California Restaurant Writers Award for Excellence, 1998, 1999,2000.