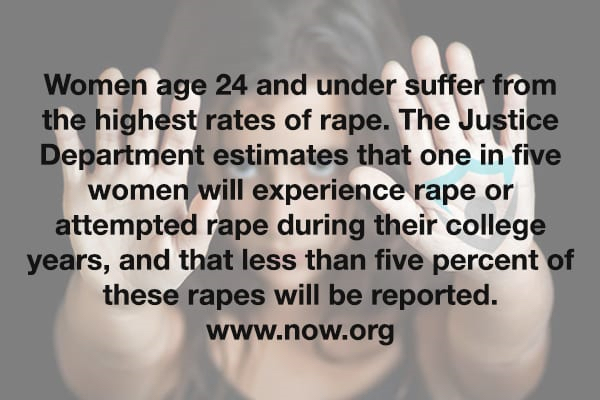 The thought of college life is exciting for all students, especially the freshman class who are often away from home for the first time without parental support. They’re anxious to make new friends and try new things as they learn to adjust to their new environment.

Rape is the most frequent violent crime on college campuses — that is appalling.

The Red Zone. The time between orientation and Thanksgiving break is known as “The Red Zone” when college students are at their greatest risk of sexual assault. There are more sexual assaults during this time than any other. To break in down further, during that time, the majority of assaults occur between midnight and 6 am on Saturday and Sunday mornings. Other research suggests the red zone is even more concentrated, and that assaults spike in the days before the school year officially begins. Why is that?

New students are easy to spot as they venture out in their new environment – and some guys are looking for them. Typical scenario: A girl is walking alone on campus and a guy approaches her, introduces himself and asks her to a party at his fraternity house or dorm. Oh boy, okay, she is excited and anxious at the same time. This is her first college party for god’s sake.

When she arrives the party is in full swing, it’s loud, dark and crowded and everyone seems to know one another and she knows no one. She’s relieved to find the one person she kinda knows who immediately hands her a drink in a red plastic cup. As she drinks she begins to relax a bit but each time she puts the cup down, she’s handed another. In no time she’s buzzed then the room begins to spin.

She begins to wonder if she could even find her way back to the dorm plus there’s no one she can call and no one waiting for her at home or even knows where she is. The guy may offer to walk her home or even suggest she sleep it off there. Neither idea is a good one. One of the biggest mistakes a woman can make is to become isolated with someone she just met, no matter how nice and polite he seems to be.

This scenario is typical on campus but especially in fraternity houses. According to the National Institute of Justice, 10% of sexual assaults occur at fraternity houses where sexual assault is considered a game and gang rape a ritual for the “brothers.” This ritualistic scene describes “rape culture.” Rape culture is also common among college athletes. Rape culture not only encourages male sexual aggression, it also supports violence against women, where women are blamed for their own assault and sexual violence is deemed normal and where rape is prevalent and often condoned.

Before setting foot on campus, young women should familiarize themselves with rape culture. In the last couple of years a few cases have gotten a lot of attention but one in particular demonstrates how far up the ladder rape culture can climb. Take for example the case of Brock Turner, a student and star athlete at Stanford University who raped and assaulted a female student behind a dumpster at a fraternity party.

Turner (referred to as the “rapist”) was caught on top of the motionless and unconscious student by bystanders. He was indicted on five charges, including rape, for which he faced up to 14 years in prison. During the trial the rapist’s attorney said the victim “should have known better” referring to her intoxication. The judge, who had also been a student and athlete at Stanford, obviously related more with the rapist than his victim. In his decision, the judge said if the victim hadn’t been drinking she wouldn’t have been raped, then he used the rapist’s intoxication as an excuse for him raping the victim.

He believed prison would have a severe impact on him and he didn’t deserve that. In the end, the judge sentenced the rapist to six months in county jail of which he served only three months. The lenient verdict caused quite an uproar around the country. The judge eventually lost his job and was removed from the bench. But what got to me was what the rapist’s father said after the sentencing, he said “[The sentence] is a steep price to pay for 20 minutes of action out of his 20 plus years of life.”

How do I Protect My Child From Sexual Assault?  Students can increase their safety on campus by locating the campus police station, storing the campus police phone number, and finding emergency phones around campus. Students should also avoid posting their location and consider traveling in groups in the evening. Many campus security patrols offer to escort groups to their destinations.

What Do I Do If I’m Sexually Assaulted?  Victims should go to their campus health center for an exam and file a police report. Victims can also file a civil protection order, which serves as a temporary restraining order. Universities often provide support services to address the mental and emotional impact commonly associated with sexual assault.

How Are Schools Addressing Sexual Assault?  Victims should go to their campus health center for an exam and file a police report. Victims can also file a civil protection order, which serves as a temporary restraining order. Universities often provide support services to address the mental and emotional impact commonly associated with sexual assault.