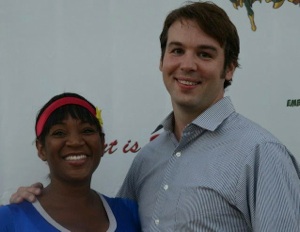 Founder/President/Executive Director of Embrace Your Cape

Kimleigh spent the first 10 years of her life in Japan, which still holds a special place in her heart. After Japan it was off to Leavenworth, Kansas, where she spent the remainder of her school years. She attended Emporia State University and received a BS in Psychology.

Despite her education, she always wanted to be a dancer, so after graduation she moved to Chicago to pursue her dream. She danced with several prestigious Chicago dance companies including Gus Giordano Dance and Joel Hall Dance. But dancing simply whet her appetite – she wanted more. On a dare, she auditioned for a play. She got the part and has never looked back.

Kimleigh has graced the stages of Chicago’s most renowned theatres: The Goodman Theatre, Lookingglass Theatre and The Steppenwolf Theatre where she performed in “A Clockwork Orange”, “Crumbs from the Table of Joy” and “Puddn’Head Wilson.”

Upon moving to Los Angeles, she had the pleasure of reprising her role in “Puddn’Head Wilson” at Garry Marshall’s Falcon Theatre. This production was honored with an “LA Weekly” Theatre Award. Garry Marshall fell in love with Ms. Smith and cast her in her first major motion picture, “The Princess Diaries.”

Kimleigh would like to thank her TEAM for their constant love and support! Life is nothing without the ones you love to share it with! This is dedicated to all the women and men who have suffered at the hands of others. Here’s to all of our greatness…May We Embrace Our Capes and learn how to THRIVE as the SUPERHEROES we all are… Love, Love, Love.

Jon Snow was raised primarily in St. Louis, Missouri. Born to strictly conservative parents, Jon’s family was heavily involved in the Baptist church. Jon’s father, who was ordained as a minister when Jon was 12 years of age, finally became a full-time minister in Jon’s early 20’s.

This strict upbringing played a huge role in Jon’s life, both as it shaped the world for him in his early years, and, again later, as he became more independent of the ideas and standards of his father. This fundamentalist approach to rearing continues to impact Jon and the work he creates to this day.

Jon’s father would say that we all have a calling. Jon’s calling, despite his parents’ early desires, seemed to be for acting and writing. As a young man, Jon thought little of acting. In fact, all he ever wanted was a grounded and humble little dream to come to fruition that would see him playing basketball in the NBA.

Acting had other ideas. After high school, Jon auditioned for SMU in Dallas on a whim, and to his surprise, SMU Meadows School of the Arts extended not only an invitation, but a mostly paid for education to boot.

Jon hit the ground running in college. Unfortunately, he majored more in drinking and partying than he did his studies and found himself quickly suspended after his first year in college. Defeated and confused, Jon returned to St. Louis with his head low, and his tail between his legs. Working odd jobs, floating from place to place, Jon finally realized he truly did have a love for acting. He then decided to go back to SMU to finish his degree, and in 2002, he succeed in finishing that quest.

No amount of goodwill or piety can ever prepare a child for abuse, nor can it protect that child. Most of his life, Jon struggled with the fact that he and his younger sister had been raped and molested as very young children, and yet, despite this, Jon always felt lucky that he still somehow managed to find ways to lead a “normal” life. He realized that if he could do this, then he could help others too, but how to do that always seemed elusive.

Jon is, at once, honored, terrified and extremely excited (yes, in that order) to be a part of the Be Your Own Superhero Foundation. The time has come to help others, and Jon is Embracing His Cape with all the gusto that befits a true SUPERHERO.