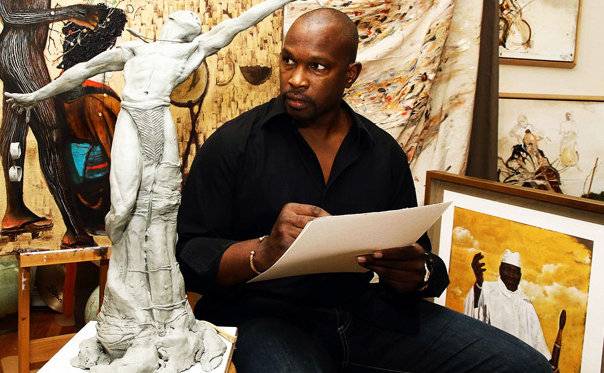 Born 1961 in Niagra Falls NY; he is the seventh of nine brothers and sisters. After earning a Bachelor of Science in Graphic Design from Southern Connecticut State University, he then graduated from the Fashion Institute of Technology in New York. After graduating, Chaz moved to Paris, France. He worked for the fashion magazine Joyce, where he illustrated the lines for various haute couture houses.

His work has been exhibited worldwide. He is well known for his portrait of Supreme Court Justice Thurgood Marshall, which was acquired by then Senator Barack Obama. It then hung in the Oval Office during his presidency, and is subsequently now resides in the private home of Michelle and Barack Obama. The artist Chaz Guest’s vision of the mythical Buffalo warrior tells a tail of a boy born into slavery. When he becomes a man he in-list in the military to fight in the Civil War. Upon his death in battle, he is reborn to become a super hero.

Chaz Guest is an American artist who creates paintings, drawings and sculptures that are original, inspiring and breathtaking. Over the past 20 years his work has reached an ever growing list of esteemed private and public collectors, including the President of the United States, Barack H. Obama.

He has introduced his patrons to a pallet of Pozulli red, Egyptian blue, and Naples yellow. Everything about his work is unique, from the linen canvas to the use of ink and oil, to the actual subjects of the paintings themselves.

More About Chaz Guest at www.chazguest.com

”A hero ventures forth from the world of common day into a region of supernatural wonder: fabulous forces are there encountered and a decisive victory is won: The hero comes back from this mysterious adventure with the power to bestow boons on his fellow man.”

“ A painting is music you can see and music is a painting you can hear.”

Storytelling is a way to reclaim history, to alter a narrative from the skewed perspective of the past to one that speaks of our shared humanity, of the universal hopes and dreams that we all aspire to and of the search for truth. Words matter, names matter, they limit or misrepresent the meaning of something. To re-frame a story and correct the limitations imposed by historical bias is a large undertaking.

Talking with Chaz Guest was a rich and engaging conversation about storytelling and images. We spoke of how to create characters and narratives that address the history of race in America, but in a nuanced language that spoke to this specific history and transcends it to speak of people throughout history. We spoke of hardship and enslavement, resistance and freedom.  When I mentioned that his character “Buffalo Warrior” was a black superhero, he said that he did not see him that way, “ He is a Universal Citizen of the Earth and a fighter for all. I do not see him as black, I think of him as tall, dark and handsome.” He also mentioned that he did not use the words slave or slavery, but ‘enslaved people’ to alter the meaning to something more human and true.

When I arrived at his studio, John Coltrane was playing in the background and we spoke about music and of the brilliant musicians of that era; Miles Davis, Charlie Parker, Theolonious Monk etc. I mentioned something about how rich the history of jazz was and Chaz gently corrected me calling it ‘American Classical Music’. He said, “It is our classical music idiom as opposed to European Classical music. These musicians are great artists and to use the term ‘jazz’ as a category lessens the importance of their work, it is American Classical music.” I was pleased to be corrected on this, as it has always been my belief that through time, history will revere these musicians as the towering giants of music that they are, whose stature is equal to any contemporary ‘classical music’ of their time.

We spoke about his past and of how early on he worked with a jazz group, the Kenny Garret Quartet, first in Tokyo, Japan, painting live on stage as they performed. He said of this, “I was so nervous painting ‘live’ that it affected my touch. The nervousness translated into speed, and into quick brushwork that took on the character of Japanese Sumi painting. I remember how Miles Davis said he wanted to keep his performers in the dark, not knowing what they were supposed to do, and that something interesting would come out of that. This experience with the Kenny Garret Quartet was like that for me, it forced something fresh and true into my brushwork and into my hand.” During this time he was also painting rich, loose portraits of these artists; Parker, Monk, Coltrane and Ornette Coleman. In an interesting aside, during a period of time while living in New York City, Chaz learned that his apartment used to be Ornette Coleman’s!

His brushwork has the character of sumi paintings; the wet and dry brush techniques in a natural improvised interaction between paper, canvas and pigment. Years ago a Japanese interviewer asked him where he studied sumi painting and Chaz said he had not studied it. The interviewer was surprised saying that he had a natural affinity for this style of painting. Chaz took a Japanese calligraphy class the very next day, it was to be a one-day class but he returned for a week, gaining an appreciation and a deeper sense of something that was intrinsic and natural to him. He mentioned how Franz Kline had said that ‘everything comes from calligraphy’, and that for him this idea has held true.

In his current body of work Chaz has created a graphic novel that is the source for the images in his paintings. Here is a swift synopsis of the mythic figure “Buffalo Warrior”. It was conceived and realized as a graphic novel with a rich origin myth for the character Booker Cooper. As a young man, with help from his friend, the plantation owner’s son, Booker escapes and finds freedom from enslavement. He becomes a Buffalo Soldier, but soon sees the injustice in fighting the Native Americans to steal their land.  Refusing to fight he flees the battle and dies in a sacred Buffalo burial site where his soul is chosen by the great Buffalo Spirit Jaa Jo, to become a fighter for justice. He is resurrected three days later as the super hero Buffalo Warrior.

It was interesting to talk about graphic novels as a form of time based imagistic storytelling and of painting with its simultaneity, how multiple levels of information and emotion are expressed in a single moment, and how painting has a suppleness both metaphorically and metaphysically to convey something about our spiritual nature. The paintings are taken directly from the frames of the graphic novel. These are rich and loosely painted with brush, sumi ink and oil; they are muscular bold drawings that capture the action and emotion on the page. He then transforms them into fully realized paintings, the color, scale and physical power alters them, becoming more complex and rich. The nuanced emotive charge of paint, its physicality, the large scale of the paintings and the bold sweeps of the brush change the images into powerful metaphors, conveying the tale from the graphic novel, but adding the intrinsic depth that oil on canvas yields.

These paintings are rich fusions of Pop and pathos, as opposed to the graphic clarity and deadpan irony of Lichtenstein. They are all emotion – the populist sensibility of the comic transformed into emotionally potent paintings. The stories bring historically charged and current political realities into a mythic universe and Chaz paints these pages from this storybook with unrestrained power and emotion. He conveys an emotional sensitivity in the faces of his characters – they burn with inner life, with hope and longing.

He spoke about getting ready for his current show at Patrick Painter Inc., that he had to complete several paintings in a very short period of time. He painted with speed and immediacy finishing all of the work before the show opened. Out of the group of paintings Chaz said that a single portrait of Booker as a Buffalo Soldier stood out. It has a haunting blue that surrounds this larger than life portrait, a look of vulnerability and openness on his youthful face. He said of this, “In the portrait of Booker something came through me that was deeply spiritual, that spoke of Booker’s inner life. I love that one can lose oneself and go so deep into the process of painting that something magical happens. I love that image of Booker.”

Chaz mentioned how deeply he feels connected to nature and that it is this connection from which his work comes. We spoke fluidly of art, music and film, of his travels to Africa, and of life as a rich journey, as our own mythic quest.

The hero’s journey is an ancient myth that has found a new vision in an American tale, one that looks at our tragic history and draws from it a story of transformation, redemption and of our shared humanity. It is in our nature to dream and to hope, to search for truth. It is the Hero’s journey of which we are all a part; humanity’s mythic quest.