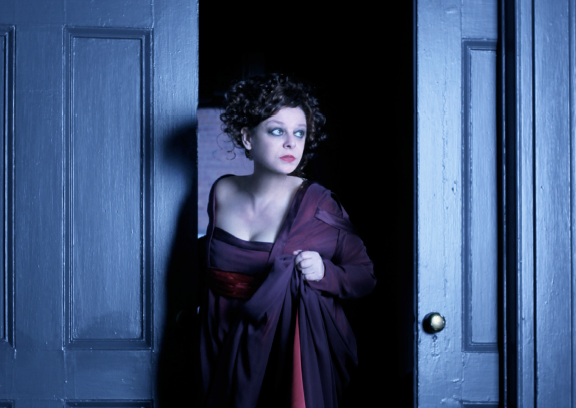 “Angela has the voice of an angel…completely commands the room and draws
you in…mesmerizing.  She once sat me down and sang Leonard Cohen’s
“Famous Blue Raincoat” to me.  I was instantly in love.” — Norman Reedus

“ANGELA McCLUSKEY !!!  She knows her light that glows from within.
She is a singer/songwriter of pathos, beauty, sadness, tempest, magic, love
of life and joy,…..she is the voice of all things” —  Michael Stipe After being hailed by Vanity Fair as a “chortling, cussing, room-dominating
force of nature” trying to describe Angela McCluskey in words is not the
easiest thing to do; if you’ve met her or been lucky enough to see her perform
you—will understand.

Born in Glasgow, Scotland, Angela first achieved recognition as the singer
of the much-adored LA band Wild Colonials—with whom she released
three albums: Fruit of Life (1993), This Can’t Be Life (1996) and Reel Life
in 2000. In that same year, Angela also released Curio, an album of torch
songs she recorded with husband Paul Cantelon, Lili Haydn, and cellist
Martin Tillman.

In 2004, after touring the U.S. with renowned artists REM, she wrote the #1
best selling GRAMMY nominated song Breathe, with French electronic trio,
Telepopmusik. In between Genetic World and Angel Milk, the two albums she
recorded with them, Angela was signed by Arif Mardin to the celebrated
Blue Note label who released Angela’s critically acclaimed album The
Things We Do— which Paste Magazine described as an album that “will
break your heart and gently put it back together again”.

In 2010, her second solo album You Could Start a Fight in An Empty House,
brought recognition from Alan Magee at The Guardian, who heralded her voice
and style as “an incredible juxtaposition of the greats: Beth Gibbons, Billie Holiday and Nina Simone.”

During the next couple of years Angela collaborated as both co-writer and singer
with Morgan Page and BT on the smash hit #1 dance single ’In the Air’ and was featured heavily on Robbie Robertson’s ‘How to be Clairvoyant’ as well as working with Paul Oakenfold, Parov Stellar, Kendrick Lamar and others—and her re-imagining of George Harrison’s Here Comes The Sun for the Sweet Relief Musicians Fund made us all wonder if we could ever hear the original song again.

In New York City 2014 , Angela wrote and performed Catch a Falling Star,
a one woman play focusing on her Scottish upbringing as well as a brief but
magical encounter with Nina Simone.

In the fall of 2015, Angela was cast for a special guest appearance in The Knick,
directed by Steven Soderbergh and starring Clive Owen. She recently worked with Soderbergh again on The Girlfriend Experience

Also, in 2015, renowned photographer and filmmaker Bruce Weber screened his
short film Wine and Cupcakes at The Sundance Film Festival. The film features
Angela and her husband composer Paul Cantelon in what could be described as
Weber’s love letter to New York City. This was followed by Angela performing alongside Elvis Costello, Meshell N’Degeocello, as well as Louden, Martha and Rufus Wainwright for 5 nights at TED Talks Live: Six nights of talks on Broadway, broadcast on PBS in New York City. It was a fitting end to a great year.

In 2016, Angela was featured as co-writer and singer on Big Gigantic’s latest single, The Little Things, which exploded to #3 on the Global Spotify chart and was featured in Nike’s new campaign and on Season 2 ofFOX TV’s hit show, Empire.

Okay, so there is a little back story on Angela McCluskey—and now to bring you up to date.

On July 29th 2016, Angela will be releasing her new single You and Me from her upcoming album The Roxy Sessions to be released through Bernadette Records.

The idea for the album was born on a wonderful night at The Roxy Hotel in
New York City. The hotel has a beautiful room downstairs called The Django
that is reminiscent of Paris in the 1960’s…think Brigitte Bardot dancing on
the table or Serge Gainsbourg leaning against the wall with a cigarette
hanging dangling from his lip.

Even before Angela started working with Parov Stellar, her band had been
messing around with Electro Swing— she had just completed a track with
the Vince Giordano Orchestra for HBO’s Boardwalk Empire. Inspired by
the confluence of events, Angela called producer/songwriter Kiran Shahani
(Supreme Beings of Leisure/Bitter:sweet) and asked if he would like to
collaborate on ‘a 1920’s inspired ’60’s album’.

As soon as Kiran signed on, they discussed the concept with The Roxy Hotel
who offered the chance for them to record the album at the hotel as well as
begin a weekly artist residency. From the point on, everything else fell into place.

In many ways, the theme of the album was inspired by the events surrounding it.

It is a record that celebrates coming through it all—the success, the failure, the heartache and despair— and finding yourself being a little less dramatic about love and intent on just enjoying your life and being thankful
for what you’ve got— and that’s something worth celebrating.

More About Angela McCluskey at www.angelamccluskey.com