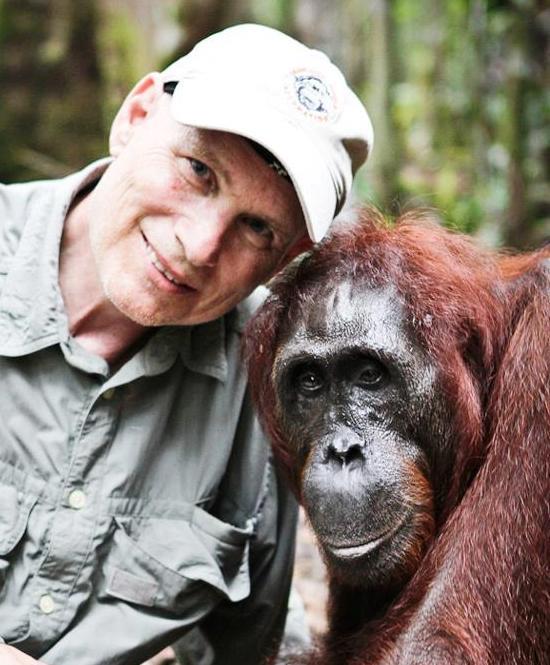 Gary L. Shapiro, Ph.D. began his involvement with orangutans 43 years ago in the field of primate cognition and learning. He was the first person (1973-1975) to teach a symbolic communication system to an orangutan (at the now Chaffee Zoological Park, Fresno, CA) and the first person to have taught sign language to orangutans in the species’ natural environment, the forests of Tanjung Puting National Park, Indonesian Borneo (1978-1980; 1981). One of the orangutans, Princess, adopted Shapiro as her father. Shapiro was able to teach Princess over 40 signs which she used to express her interests in obtaining items and activities of interest as well as describing her environment. During his time in Indonesian Borneo, Shapiro assisted in the rehabilitation efforts of dozens of orangutans confiscated from the illegal pet trade and monitored the phenology of local rain forest ecosystem.

Shapiro received his doctorate in Zoology in 1985 from the University of Oklahoma then returned to Indonesian Borneo (1986) to conduct post-doctoral freshwater ecology studies in Tanjung Puting National Park. Shapiro’s interest in the freshwater ecology of Borneo was an extension of the research projects he conducted while being employed by the Oklahoma Water Resources Board (1982-1985). He spent 28 years as a government scientist, first as a biologist with the Army Corp of Engineers, then as a planner with the California Governor’s Office of Emergency Services and finally with California EPA in the Department of Toxic Substances Control where he worked as a Hazardous Substances Scientist and an emergency responder. He retired in 2014.

Shapiro was the co-founder and vice president of the Orangutan Foundation International from 1986-2004 where he administered and oversaw the activities supporting research and conservation in and around Tanjung Puting National Park. He participated in the 1993 Population and Habitat Viability Assessment in Sumatra and authored or co-authored various papers on orangutan linguistics, cognition, conservation and ethics. In late 2004, Dr. Shapiro and his Indonesian wife, Inggriani, were inspired to create the Orang Utan Republik Education Initiative (OUREI), a nonprofit project, in response to the education needs underscoring the crisis facing orangutans today, particularly in Sumatra. In Sumatra, the orangutan is Critically Endangered. In 2007, the Orang Utan Republik Foundation (OURF) and OUREI Indonesia (OUREII) were established as legal organizations to support the programs of OUREI in Indonesia.

The goals of OURF and OUREII are to transform the attitudes and values of Indonesian people regarding the orangutan and its rain forest habitat such that they become the stewards of their forests and wildlife. Shapiro’s philosophy is to enroll the Indonesian people to become the educators. Shapiro’s efforts have lead to the establishment of Orangutan Caring Week in Indonesia as well as the Orangutan Caring Clubs of Indonesia.

Through OUREI, Shapiro facilitated the establishment of the Sumatran Orangutan Education Consortium, a group of Indonesian NGOs that assisted in putting on an education conference, workshop, and summit in Sumatra (2006). Shapiro administered an education program to reduce the human-orangutan conflict in Sumatra through the administration of US Fish & Wildlife (USFW) funds to the consortium members. He also co-administers a successful Indonesian scholarship program with two local NGOs.  130 Orangutan Caring Scholarships have been given out since 2006. Shapiro also oversees the LP Jenkins Fellowship for Orangutan Research, given in honor of his late mother, which has helped Indonesian and foreign graduate students in their field research. Additionally, through OURF, he administers the Mobile Education & Conservation Unit (MECU) with the Orangutan Caring Club of North Sumatra to bring human-orangutan conflict reduction programs, tree-planting and sustainable farming activities to villagers living near orangutan habitat. Seeking and implementing solutions of sustainability for local people through education and innovative collaborative projects is the key to saving Indonesia’s great red ape and other species.

Shapiro returns to Indonesia each year to facilitate OURF’s programs in Jakarta, Sumatra and Borneo. He also conducts ecotours to Borneo and Sumatra, and he is an avid SCUBA diver. Shapiro also lectures to audiences of all ages in both English and Bahasa Indonesia when he has the opportunity.