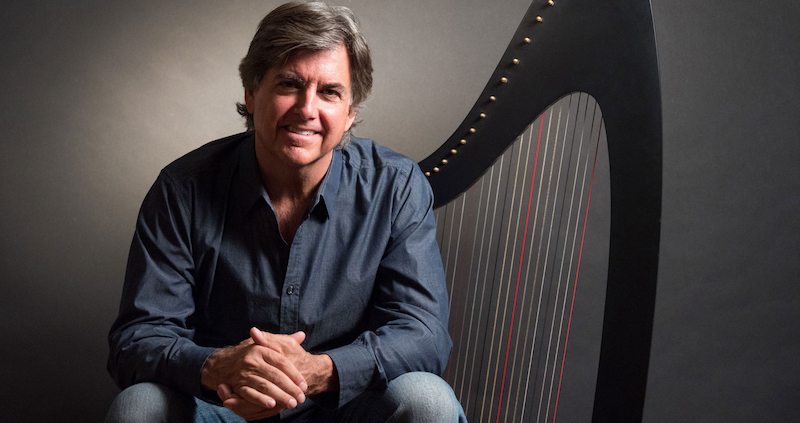 When the muse comes calling to any person interested in the arts, she is not always instantly heeded, but perhaps stays in the back on the person’s mind, sometimes for years. Like a lingering memory of something pleasant, she waits patiently for the stars to align and serendipity to enter the picture and that is when the muse is embraced by the person. For some, it happens early in life but for others, it may not occur until much later period in life. This was the case for Peter Sterling.

Born in Santa Monica, Peter began playing the piano at 6 years old, first accompanying his brother who was practicing violin. For a period of four months, he played, solely by ear, for his mother’s and his own pleasure. After a family friend heard and watched Peter playing, the friend chastised him, saying he was “doing it wrong.” As would almost any child, Peter resented the statement, and stopped playing right after that.

His muse sensed his despair. However, all things come to those who waits Peter’s wait lasted more than a few years. When he was 33, he was earning a living as a ski instructor to celebrities in Aspen, Colorado. It was a good living, but from out of the depths of his memory, his muse called to him. Her siren song was not to be ignored and Peter moved to Sedona, Arizona, drawn to its energy vortices, its natural beauty, and its powerful connection to a higher purpose in life. It was in Sedona that Peter discovered his affinity for, or more accurately, his mystical connection with the Celtic harp. It was 1993 and he took to the instrument, without any formal training or lessons, like the proverbial fish to water. His playing talent sprung forth in an almost organic manner, surprising Peter most of all. As part of this emergence of his muse, and tapping into the positive energies that swirl around Sedona, Peter decided that it was time to rethink much of his life. Making changes to his diet, engaging in energy healing, chiropractic medicine, herbal treatments, and shamanic workshops, Peter “came out of the shadows,” as it were and emerged a wholly changed person.

His career as a recording artist began in 1994 with his first album, Harp Magic, released on the World Disc label. Success came almost immediately as the recording was nominated for the Best Instrumental Album award by NAIRD (now A2IM), an organization for independent musicians. His acclaim continued and grew exponentially in the 2000s with multiple nominations from the prestigious website New Age Reporter/Zone Music Reporter, including several nominations for Album of the Year. His albums consistently charted high up in their top 100, including grabbing the #1 spot for his 2013 release, Twilight Serenade. While his recent works are released on his own Harp Magic label (including his 2018 album, Magic Kingdom), Real Music, one of the giants of new age music, released his Shadow, Mist and Light album in 2005. His most recent recognition came in 2017 when he shared the Hollywood Music and Media Award for Best New Age song.

Besides his music, Peter is also a stained glass and visual artist and has been since before he began playing the harp. His beautiful art work decorates the interior of his Sedona house (including a gallery of his Portals of Light crystal alchemy paintings) which he shares with his son 7-year old son Micah (Peter is a stay at home father and loves it!). In the little spare time he has, he also conducts Jeep tours of Sedona’s canyons for private clients and he is also heavily involved with the growing CBD hemp industry. Even with such a full plate as he has, Peter found time to write a book, Hearing the Angels Sing, and he also conducts workshops on the science of sound healing and sacred geometry.

When he is asked “What is the best part of being a musician?” Peter answers “Creating music that touches the heart and soul of listeners…bring[ing] peace and healing to people all over the world. I love receiving letters about how my music has touched peoples’ lives.” Peter looks back at his path to the present now and humbled at his worldwide success. Back when he was recording his first 8-track compositions on a cassette tape in Byron Bay, Australia, and then marketing it by going door-to-door to Sedona’s stores, he could scarcely imagine that one day his music would reach people across the planet through international airplay (Pandora, SiriusXM, Soundscapes), as well as on major airlines (United and American). Sometimes, it pays to wait for just the right moment to open oneself to one’s muse.