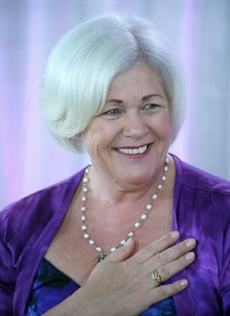 What If Horton Heard a Who, and Horton is Peladian, and We Were the Who’s Living on Whoville? CHRISTINE DAY IS A LEADING SPIRITUAL TEACHER, HEALER, channel and author.

Following a traumatic childhood in her native Australia, Christine was diagnosed with advanced Systemic Lupus at the age of 31 and given a short time to live. Shortly afterward, she experienced a profound spiritual awakening with the Pleiadians, the energy of which moved her to a place of complete self-healing. Since then Christine has been presenting Pleiadian Events, Seminars and Transmissions of Light throughout the United States and internationally. Christine is the founder of FREQUENCIES OF BRILLIANCE, a unique healing modality that was channeled through her twenty years ago, along with the original Amanae multi-dimensional bodywork. Christine’s first book,

Pleiadian Initiations of Light, contains many of the Light Initiations from the Pleiadians that have brought Christine to her own self-awakening. For the first time in the history of her association with the Pleiadians, Christine is now offering 3-day Pleiadian Seminars to the public. Additionally, she makes a number of public appearances each year, presenting live transmissions.

She also presents twice-monthly free Pleiadian Initiations of Light via an internet radio broadcast on the World Puja Network Christine also presents a live internet TV broadcast on the last sunday of alternate months out of Las Vegas. These broadcasts are free and are filmed in front of a live audience. Christine’s latest work is the foundation of the PLEIADIAN ENLIGHTENMNET ACADEMY, which, over the coming years, will offer a number of original multi-media online courses, the first of which will be the LANGUAGE OF LIGHT INITIATIONS, to be launched in the early spring of 2011.

To learn more about FREQUENCIES OF BRILLIANCE, which now has practitioners all around the world, visit www.frequenciesofbrilliance.com. To see and hear Christine Day live, see her in Los Angeles, CA at the Conscious Life Expo. For More information visit www.2012.consciouslifeexpo.com