Changing the Way We Look at Green Products, with Guest Alan Tratner on Life Changes With Filippo S1:E13 (2009) 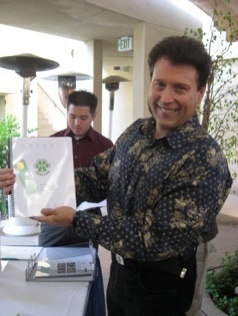 Alan traveled the USA conducting the Ultimate Crisis seminars, led an environmental and alternative energy delegation to the former Soviet Union for the Citizen’s Ambassador program.  He was editor of Energies journal for the Solar Energy Society of America, published the Geothermal Energy magazine and Geothermal World Directory.  In the 1990’s he became director of the Green Business Conference of the ECO EXPOs, created the Eco Inventors and Eco Entrepreneurs Workshops, and the New Environmental Technologies Exhibits.

Alan has served on numerous boards and committees and projects in public and private sector, including being the southern California director of the Sun Day–the international solar energy event appointed by  the Governor of California and Mayor of Los Angeles.

Alan is on board of Clean Business Investment Summit/California Coast Venture Forum Cashing in on Great Ideas for Women(and men) Inventors.  Alan A. Tratner is president of the Inventors Workshop International and the Entrepreneur’s Workshop, Director of the Small Business Entrepreneurship Center, a SCORE (US SBA) counselor, and was publisher of the Lightbulb Journal and INVENT! magazines.  He is an inventor and serial entrepreneur, with 12 inventions/patents.

Alan has been dubbed the “Minister of Ideas” by the media and has been featured in the leading media of our time: Wall Street Journal, Inc, Entrepreneur, Business Week, TIME, USA Today, Fortune, America Online Forum, NPR, and has appeared on OPRAH, CNN, Good Morning America, CNBC, and was co-host of a nationally syndicated radio program on the Business Radio Network “The New Venture Money Show” and “Inventors Workshop of the Air”. Alan has mentored and assisted thousands of inventors, new product developers and small biz start-ups.

Alan created the Great Idea Contests and Imagination Fairs and YIPEE! [Young Inventor’s Partnership for Entrepreneurship and the Environment] programs for kids, the Small Business Success Forums, and has presented over 3700 workshops from Stanford University to Moscow, Russia.  He has received recognition and awards from the White House to Governors and Mayors, and is a nominator for the annual Lemelson/MIT $500,000 award to American Inventors.