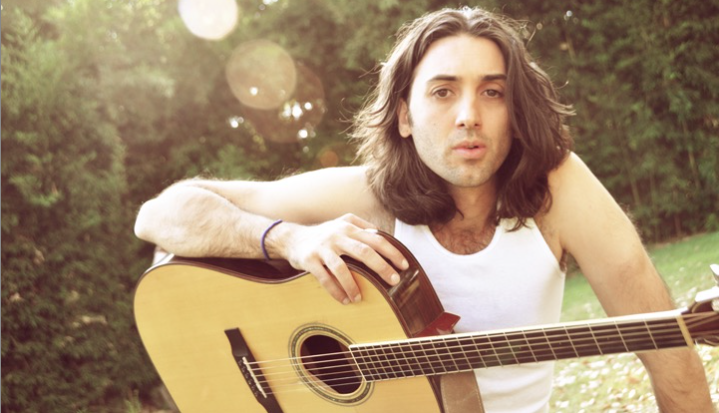 Throughout Marco Aiello’s music career, people have often struggled to define his style. This isn’t the cliche story of an artist with an original sound – but rather, an exploration of what happens when the son of struggling Italian immigrants experiences powerful artistic influences from two vastly different musical cultures.

The result is evident on Aiello’s first solo album August Light, where there’s an undeniable intimacy. Aiello’s voice and vocal phrasings draw you in with a softness that glows as it bounces around the musical textures of acoustic guitars merging with telecaster countermelodies. There’s a vulnerability and sweetness that is the foundation of the songs on August Light – and Aiello is able to be soft without compromising his command for your ear. There’s intensity behind every note – and by the time you’ve listened to the entire album, you’ve experienced a dynamic vocal style that’s rare in today’s singer-songwriters. Aiello unleashes his voice at just the right moments, too. Aiello is so confident with tenderness, that in the movements in August Light where there is explosion – it has a deeper and dramatic impact. The vocalist and producer are clearly intentional about this – Mike Castonguay (imaginationsurplus.com) supports Aiello with arrangements and musical choices that accentuate Aiello’s take on songwriting – which is oddly modern and throwback at the same time. Castonguay approaches August Light like a young Daniel Lanois flirting with Phil Spector while throwing in some of Aiello’s 70’s Italian singer-songwriter influences. It’s strange – but it’s comforting to hear the “wall of sound” approach work so well with such a quieter and acoustic based record.

The haunting thing about Marco Aiello’s voice is that while it stands out with phrasing, tonal qualities and cadence that’s uniquely his – it’s immediate and familiar at the same time. Why shouldn’t it be? You’ve heard this voice before even if you weren’t aware of it. Aiello has spent his musical career using his voice in so many ways within professional entertainment – the chances you haven’t heard him before are unlikely. You’ve heard or seen him on every major network whether it’s NBC, CBS, MTV or even NICKELODEON. You’ve heard his voice on TV, Films and national commercial jingles. When the Grammys honored the Beatles, a jingle featuring Aiello’s voice rendering a take on “Hello, Goodbye” for Target was aired. Whether it’s a songwriter singing in the background in AMC’s Mad Men, an inspirational song during The Biggest Loser – or an American car commercial where “that guy sounds reminiscent of Bono – but different” – his voice has been there all along. He toured nationally with his acoustic band – “The Red” – and gained critical acclaim for being a skilled live performer. Reviewers like to muse that Aiello’s performance style “makes you feel like you’re hanging out with him in his living room” – and he is one of those performers that easily commands an audience. August Light is the album that finally captures that very essence – and packages it in a way that a bigger audience can explore. This record elevates Marco Aiello’s emergence in an extreme way because Castonguay is the producer that figured out how to introduce a strange talent so that it’s accessible and timely. The 11 songs on August Light don’t hurt either – this is a songsmith who isn’t afraid to push the boundaries of songwriting while keeping every track true to its immediate goal – connecting with a listener in the simplest and most direct way possible.

“I’m often asked about my ‘sound’ and how I came up with it,” explains Aiello. “You don’t come up with a sound – your sound is a reflection of who you are and what your soul is here to express. I was introduced to music very young by my father. On the one hand, he was listening to great American artists from the 60’s and 70’s – The Rolling Stones, The Beatles, Led Zeppelin, Pink Floyd… On the other, he played records by Italian Singer-Songwriters – Lucio Battisti, Umberto Tozzi, Pooh – wow what a mouthful, right? Kids growing up here would never have accessed this music – these were legit Italian folk and rock artists. They had very original arrangements, weird production, poetic lyrics and were known for being great singers – not because they were necessarily technical singers – they just had expressive and passionate voices. My earliest memory in life – is sitting in front of my father’s stereo, I must have been 3 or 4. My first conscious thought that I remember was – ‘Wow – somebody made that music and now i’m listening to it.’ It happened with spreads of music that to anyone else would seem conflicting. That blend – that insane distance between the two cultural frameworks in music merged inside of me at a really young age. It was a time when my family was immigrating to a new country and it was an unstable time – that music got written inside of me and maybe it was confused. Maybe the code had to get screwed up for that mini version of me to process it. I think some of the tendencies in my music are perhaps unfamiliar to American ears – and that may give the illusion of a new sound – but I’d argue that it’s only the feeling of it that is foreign. American artists are the coolest – they are the epitome of brilliance and cool and emotional power. Italian artists from the 70’s were ridiculously vulnerable – there’s this place they were willing to go as artists that’s pure and a raw exposure of personal flaws and pain – and there’s a courageousness there that you can’t ignore. I consider myself an American artist in that my music is speaking directly to an English speaking audience. But then there’s that blend of Italian influences – a language I still speak. It’s something that’s deep in my soul and I feel like August Light captured the emotional signature of the two coming together.”

Learn More About Our Guest Marco Aiello at www.marcoaiellomusic.com