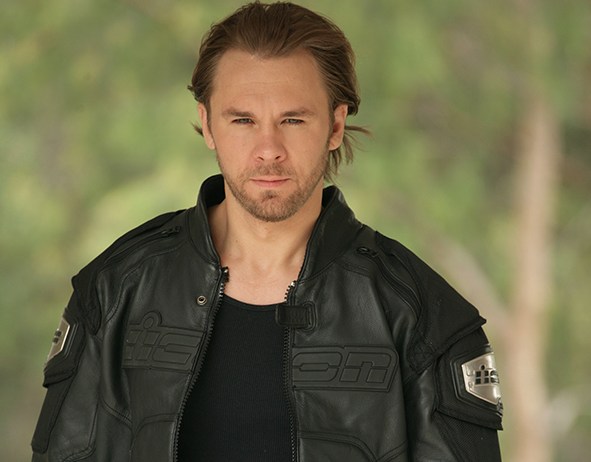 Actor/ Model/Stuntsman Kayd Currier is a curious study in the polarity of opposites. While maintaining an easy, natural, rugged American masculinity, he is simultaneously emotionally sensitive and open, with a developed feminine side. The dichotomy of contrasts creates a most interesting male archetype—the sensitive tough guy with the heart and soul of a poet–strong yet vulnerable. The Brad Pitt visual references are obvious, as well as the Fallen Angel model that Heath Ledger and Kurt Cobain personified, without the victimized tragedy. With his quintessential American mannerisms, good looks and boyish charm, he easily represents the new order of a young Hollywood star in a hip and contemporary way.

Originally from the New England area, Kayd had first lived in Boston, then in Arizona before coming out to the West Coast to pursue an acting career. Born July 22, 1983 in Derry, New Hampshire to Heather Angers, a nurse and to Richard Currier, an avid motorcycle rider who would later operate his own machine shops, Kayd was placed on a motorbike from age one, and was riding his own first motorbike at three years old! At 17 Kayd Started racing motorcycles then in 1998 became a factory sponsored motorcycle roadracer. Kayd has also owned multiple motorcycle shops. Specializing in custom builds, rigging for film and motorcycle stunt specialties.

Kayd’s professional work history in Arizona and Hollywood includes a host of stunts, dramatic leading roles in film and TV such as LEGION, THE END TABLE, Born to be a Star, The Cure and many and a Sci-Fi feature film, ISF1. He also hosted TV shows, including 37 episodes of STARQUEST. His California theatre experience includes THE NEXT STAGE THEATRE featuring PINK FLOYD: THE DARK SIDE OF THE MOON, Angry young women. While his modeling work includes a striking SUE WONG fashion campaign for the noted designer. Kayd also recently did the campaign for designer, Antonio Barragan’s DEMON RIFF, a contemporary collection of Avante-Garde menswear.

Learn More About Our Guest Kayd Currier at www.kaydcurrier.com