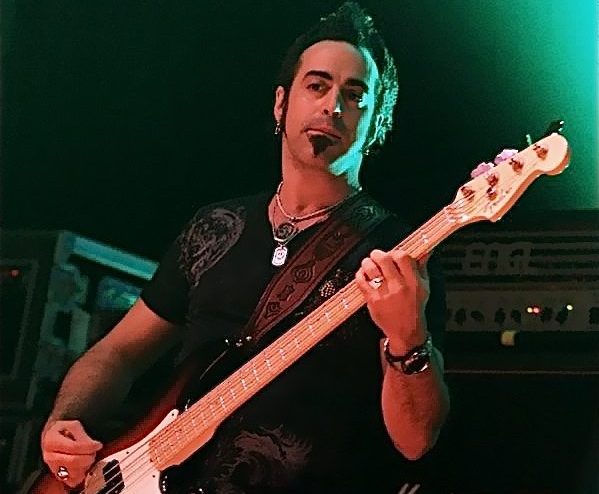 Having been influenced by a musical family, I began singing at age five & I started teaching myself bass at age fourteen when I was inspired by various artists in Rock, Blues, R&B, Funk, Fusion, Jazz and Progressive Rock. I studied music theory with Schuyler Collins from the Berkley School of Music, and voice with master vocal technician Nikki Cukor in New York. I started playing bass and singing professionally at 15 for several top drawing bands in the Northeastern Pennsylvania & east coast club circuits. The bands Black Water, Quest and Rogue were some of the best vocal intensive Rock show bands that I had the opportunity to cut my teeth with in the NorthEast.

I then moved on to Los Angeles, to further pursue my music career. I was one of the top ten bass players picked by

BILLY SHEEHAN for the MUSICIANS INSTITUTE Scholarship Contest. I then attended the world renowned school, graduating at the top of the class with the

This led me to assistant teaching and private instruction at M.I. for the next 2 years. Reputation and experience led me to audition for

with whom I joined the eclectic, dark, Alt-Rock band,

MUMBO’S BRAIN, and with whom I co-wrote & recorded the instrumental Rock/Funk/Jazz/Fusion record called,
“ CHASING THE SUN ”.

Having caught the attention of label exec Fred Brown at Warner Bros, I was referred to work with,

Since then I’ve played with Warner Bros recording artist,

TRACY DAWN, alternative L.A. Indie rock band, PUSH
and played bass on co-produced and arranged an album for Ft. Worth, Texas singer/songwriter.
ELIZABETH WILLS with producer CHRIS VAN TASSELL. I recorded and co-produced an EP with the band

“ CONFESSIONS ” with the band JADED, and recorded the album

JAMIE GREEN (named by L.A. Music Awards as Best Unsigned Artist) for her new album ” TRUCE “. And then recorded the hit album:

“FALLEN” by, EVANESCENCE, with producer DAVE FORTMAN
of which the single,

“BRING ME TO LIFE” and was #1 on BILLBOARD’S MODERN ROCK CHART for several weeks.

46TH ANNUAL GRAMMY AWARDS in 2004 & for which I recieved
two Grammy Certifications for.

“ FALLEN “ sold over 14 MILLION COPIES WORLDWIDE. (More @ Grammy.com) Two tracks from ” FALLEN ” also made it on the soundtrack of the comic book movie ” DAREDEVIL” .

Recently, I’ve had the honor & priveledge of spending the last 2 years as the new bassist for the Quintessential Classic Rock Band,

Last year I also had the priveledge of doing some gigs in Russia with one of my fav singers of all time, BOBBY KIMBALL of TOTO,
with my friends and killer musicians JAY GORE on guitar,
ALEX ALESSANDRONI on Keys & ROBIN DIMAGGIO on Drums!

ROB CARONA & recorded the awesome CD “THIS IS THE LIFE”.

MOST RECENTLY I’ve teamed up with TTM GUITARS from Palm Desert CA and am designing a NEW LINE of 4, 5 and 6 STRING BASS GUITARS with unique design features. Protoypes are now being built with working models to be expected later this year.