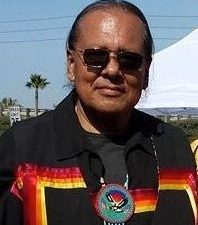 Michael Whitehorse Aviles, Born at San Fernando Calif., member and elder of the Gabrieleno Tongva San Gabriel Band of Mission Indians, a descendent of the California Mission System established by Spain in the 1700’s.

I am also a descendant of the Southern Piaute and Western Shoshoni People of the Mojave River, In the Mohave Desert near what is now Victorville California. My family were part of the govt., boarding school system which was designed to assimilate the Native Americans to non Native ways and traditions at Sherman Indian Institute Riverside California. For the last two years, I have been working as a Tribal Monitor who oversees construction sites that require deep digging, to look for ancestral remains and artifacts.

For all of my life, I have always been involved in the arts, musician, photographer, graphic design, (owner of the M.A.Art Works Screen Printing and Graphic Design Co.) sculptor, and all other art mediums.

Recently in June of 2016, I completed a commission of a fine arts oil painting on canvas for the State of California Indian Heritage Museum in Sacramento California, for the Juan Batista De Anza California History project were the painting is on display. For about 18 years, I have played Native Flutes through out California, Washington State, and Oregon for special events such as Pow wows, memorials, ceremonials, and concerts, (the latest venue at Pachanga Resort and Casino) other instruments include the Violin, piano and bass guitar.

For five years I have organized, pow wows through out Southern California with the latest one held on the 2nd weekend of November honoring our Veterans, Native or Non Native, for the Native American Veterans Association helping and working with Veterans. I am involved with Tribal matters such as officiating Ancestral Reburials, funerals, teaching and talking with students and groups on California Native History. Today I dance in pow wow circles as a Gourd Dancer (formerly a Northern Traditional Dancer), a Dance founded by the Kiowa people, Dancers who are Veterans, a Warrior Society.