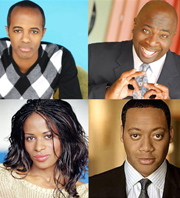 JORDAN BLACK has been a series regular on such shows as Punk’d, Halfway Home, MTV’s The Lyricist Lounge Show, the WB’s On the Spot and E!’s Star Dates. His voice has been heard on South Park and he’s been seen and heard on Community, True Jackson VP, Glory Daze, How I Met Your Mother, The Tonight Show, Jimmy Kimmel Live, and MadTV among others. He also appeared in the Christopher Guest film For Your Consideration as well as the upcoming films Fred for Nickelodeon and Bridesmaid from Judd Apatow . Jordan’s writing credits include Saturday Night Live and Fox’s Stacked among others. Jordan is an alum of the Groundlings Main Company.

GARY ANTHONY WILLIAMS appeared as a series regular on Boston Legal and Blue collar TV. He also recurred as Abe Kenarbin on Malcolm in the Middle and is currently recurring on Weeds. Other TV credits include Hot in Cleveland, How I Met Your Mother, Desperate Housewives, How To Be a Gentleman, Workaholics, Reno 911 and CSI. In the world of animation, he plays Uncle Ruckus in Aaron McGruder’s The Boondocks, Mr. Dos in Disney’s Special Agent Oso, and Dad on Disney’s new Doc McStuffin. In addition, he does several voices each week on Cartoon Network’s new show, Mad. Gary recently filmed The Factory along with John Cusack. Other films include Harold and Kumar Go to White Castle, Undercover Brother and Soul Plane.

Gary has written ad produced many comedy songs and music videos. He recently wrote and produced a music video for Funny or Die, and a major network (which he’s legally not allowed to name). He also wrote four songs for the TV show, The Boondocks. Gary is very pretty. Oh yeah, he’s the artistic director of LA Comedy Shorts Film Festival.

Host of the most successful and widely syndicated radio show in the world, American Top 40, broadcast in 120 countries to an estimated 1 billion listeners every week. Became one of the most recognized voices in the world.

Has starred in several movies and numerous television shows including two network series for CBS, the Top 20 series “Dave’s World” with Harry Anderson and the Fred Silverman production “Loose Cannon.” Also one of the stars of the number one nationally syndicated series “Hollywood Squares.”

Currently the voice of CBS television’s “The Late Late Show with Craig Ferguson.”

Created and hosted “MentalRadio” – blurring the line between reality and imagination – bringing energy and humor to mind control, mystics, science, and the mysterious unknown with real radio theater. www.mentalradio.net.

Created, produced, and hosted Internationally syndicated radio shows “Top of the World,” and “Rock the World.”

Created the Branding, Advertising and Marketing campaign for a West Coast home electronics company “The Federated Group.” Performing as the parody spokesman Fred Rated, the campaign increased sales 500%. In four years, the group grew from 14 local stores to 78 superstores in 5 states. It was the first regional advertising campaign ever to have received a 2 page spread in Time Magazine.

Awards in advertising include CLIO Awards and the Big Apple Award.

Created the Branding, Programming and Marketing of the most successful Alternative Rock station in the country, “World Famous” KROQ-FM in Los Angeles.

Created the Branding, Programming and Marketing for the most successful Album Oriented Rock station of the 70’s and 80’s, for ten years the most financially successful rock station in America, KMET-FM in Los Angeles.

As a radio personality in Los Angeles, won the Billboard Magazine Personality of the Year Award, and gained some of the highest ratings in the history of Boston radio (33% of listeners aged 12 and over).

Started in radio as “The World’s Youngest Disc Jockey” at the age of 11.