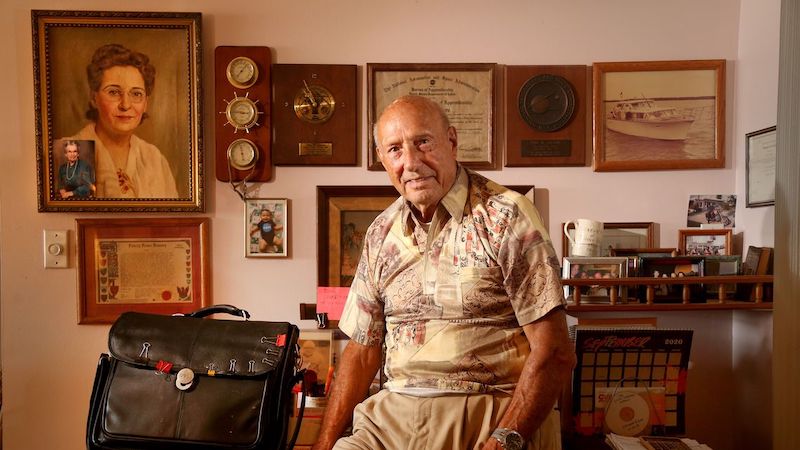 Just turning 89, Paul was born and raised outside of Detroit Michigan, Paul grew up an Army brat and was often on the move.  His father stationed at Ft. Sill Oklahoma and then the family moved to Nanking where Paul spent some time immersed in the local culture until the age of 15 when they moved back to Oklahoma.

Paul joined the Navy straight out of high school in 1950 and was stationed in San Diego California as a mine sweep sailor.  In 1952 Paul met Genevieve “Ginger” Laisure, the eventual mother of his 3 boys, Paul, Michael and Mark.  Paul and Ginger moved from Long Beach to Cleveland 1954.

The following year, in 1955, Paul was hired at NASA Lewis Research Center (now known as NASA Glenn Research Center) as an apprentice and spent 23 years as a research electrician assigned to various technical projects throughout the lab, most prominently, the “Zero G Research Facility.”  Zero G is still the only facility in the world of it’s kind.  It was originally designed and built during the space race era of the 1960s to support research and development of space flight components and fluid systems, in a weightless or microgravity environment.  The facility is honored as a landmark on the national registry.

Further in his career, Paul was promoted to technical services coordination officer managing the implementation of technical services installations throughout the lab.  Paul closed out his career as an administrative officer within the 80 person research team at the Engine Systems Division which managed all aspects of research and testing of breakthrough engine technologies.

During his time at NASA, Paul exercised his creative muscles when he was elected to the Lewis Social Activates Committee; “LeSac.”  LeSac coordinated entertainment and social interactions between the 5000-person lab and the city of Cleveland. Paul was also a member of the NASA Speakers Bureau and gave presentations to High Schools and Universities in the greater Cleveland area.

In 1982, Paul took an early retirement option to pursue a life in St. Petersburg, Florida and other endeavors like craftsman work and boating.