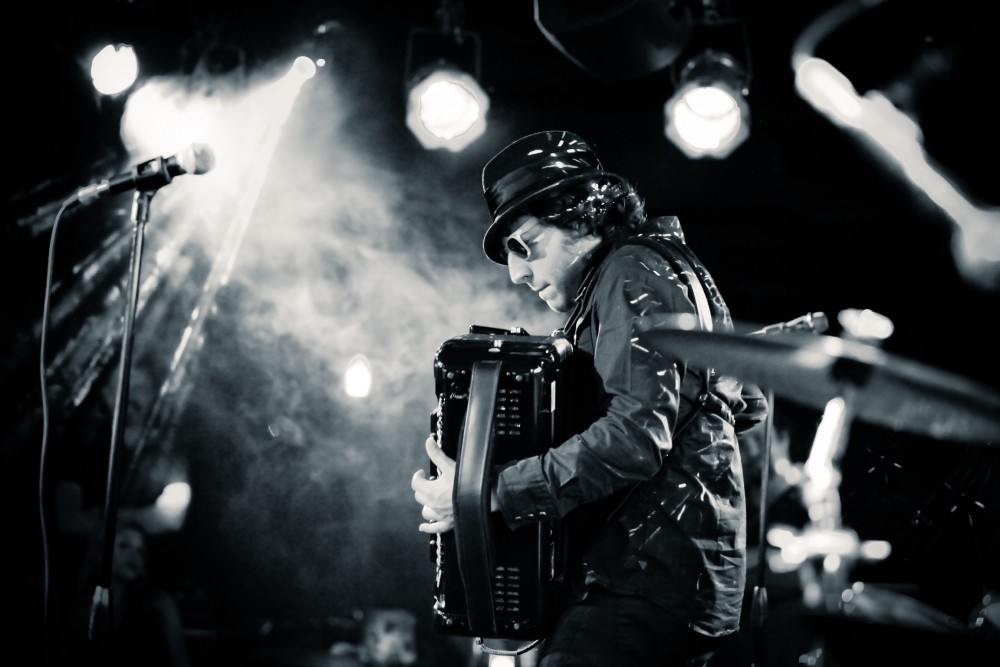 Cory Pesaturo (“C Pez”) is a graduate of the prestigious New England Conservatory of Music in Boston, MA, where he was the first in decades to major and graduate in the accordion.  Pesaturo tied the record for the youngest National Champion at 15, and later became the only person to win World Championships in Digital Accordion, Acoustic Accordion, and additionally Jazz Accordion.  The most famous accordion Legend in US history, Dick Contino, said when Cory was only 15, “Of all the accordionists I’ve seen over the years, Cory is the one to pass the torch to, the only one who has all the tools to bring the accordion back to its former glory.”  Pesaturo’s main contribution, is his work to revolutionize how the accordion should be used, played, and presented in modern music.  In 2014, Pesaturo gave a TED Talk on this quest for the instrument, the first Talk of its kind.  He has developed his own electric accordion, and has made the first ever skinned accordion that includes a symmetric midi lighting system attached to the keys.  In 2016 Facebook granted Cory “Verified” status, given to people who are well known and influential in their field.

Fittingly, Cory’s first major performance was sitting in for an ill Myron Floren at age 11 when the Lawrence Welk tour came to his home state of Rhode island, as the famed TV show is considered one of the instruments main reasons for its image collapse.  Pesaturo’s extensive résumé now includes performances with Wynton Marsalis, Johnny Depp, Pink Floyd’s Scott Page, Lady Gaga, and appearances at the White House for President and Mrs. Clinton on 4 different occasions, starting at age 12.  On one of those occasions, he became the youngest person to ever perform at a State Dinner, playing with the Marine Strolling Strings for the President of Hungary.  He has since performed at 7 other events for the Clintons and continues to keep in touch as proved by his 14 letters from the first family.  He has judged accordion competitions in the US, Canada, and Europe, in addition to music competitions in general.  Cory also gives masterclasses on both Music Theory, Improvisation, and the Accordion at various universities throughout the US.

On his Classical side which is less known, a win at 16 years old in a concerto competition at the New England Conservatory of Music, gave Pesaturo the rare opportunity to perform with a Symphony Orchestra as a featured soloist, where he became the youngest accordionists to ever solo with a symphony orchestra in the US back in 2003.  Concerning his Jazz side, Cory recorded two CD’s with saxophone legend George Garzone and his famous band “The Fringe” at age 19.  Since that time, Jazz has become the genre Cory is most noted for, though he feels comfortable improvising in almost any style.  It is worth noting that all of Pesaturo’s performances at the 3 World Championships were played on accordions which were not his, and were mostly improvised; Both of these are completely unprecedented in the world of accordion competition.

Cory is also heavily involved and respected with the weather and motor sports worlds as well.  From 2005 to 2006, he composed the Official list of records set by the record-breaking 2005 Atlantic hurricane season.  He has also written the lists for the 2007 and 2008 Seasons as well.  Moreover, he has put out reports on Winter Seasons for the Northeast of the United States, which have been featured on Accuweather.com and Wunderground.com amongst others.  He is known for being a pioneer in the FreeSledding world with his own sledding mountain called “CN Mountain”, and has various other hobbies which he dedicates himself to, including writing sports blogs for such as Bleacher Report.  Furthermore, he collaborated with members of the Red Sox and bands such as the Drop Kick Murphy’s on the “Fenway 100” album which released in 2012.  His music is regularly played with Formula 1 broadcasts on NBC, FOX, and Velocity, and has an ongoing musical relationship with 98.5 The Sports Hub in Boston.  Cory is also currently working on a Formula 1 book that looks to change the way people analyze sports history and its champions in a similar fashion to Bill James’ Sabermetrics book on Baseball.

Learn More about Our Musical Guest Cory Pesaturo at www.CoryPesaturo.com