Talking Suicide to Save Lives 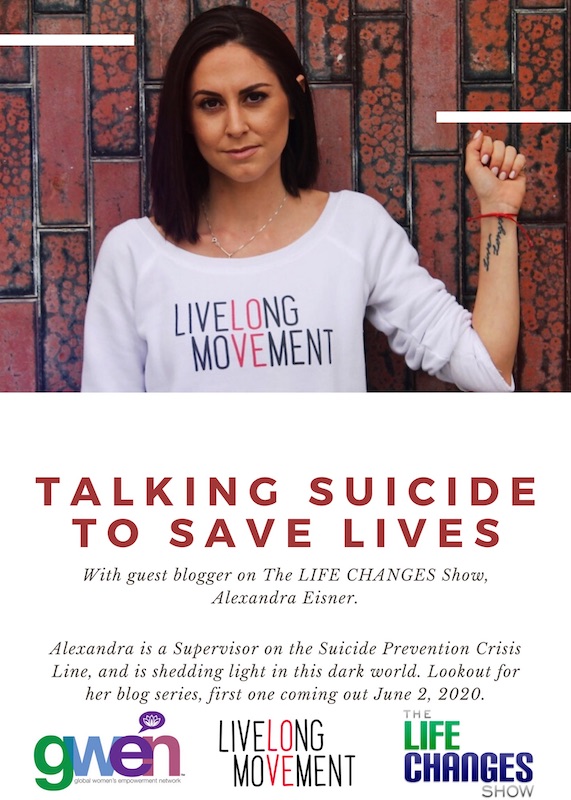 Talking Suicide to Save Lives by Alexandra Eisner

Happy to introduce a new Blog Series on yet another important topic, especially at this time. “Talking Suicide to Save Lives,” by Guest Blogger, Alexandra Eisner of LiveLong Movement.
Alexandra is a Supervisor on the Suicide Prevention Crisis Line, and is shedding light in this dark world. Lookout for her blog series, first one coming out June 2, 2020.

Alexandra’s connection with suicide started at age 17 when she first had a thought to kill herself. For nine years she battled and toyed with the thoughts, until ultimately she came to planning and attempting her death by overdosing at a music festival at age 26. The death ended up in an awakening so powerful she promised the Universe she’d dedicate her life to learning about exactly what it is she had just experienced.

She has since turned to meditation and energy healing to continue the new journey. A year after the attempt she felt strong enough to support others heal from their suicide ideations. In June 2018 Alex started volunteering on the Suicide Prevention Hotline, while working as the Global Security Senior Coordinator for Sony Pictures Entertainment; where she had worked for over 7 years. Shortly later in January 2019, Alex was offered a position as the Security and Secrecy Assessor for Apple TV+. Alex made the move and traveled 50% of the time within the next year around the world managing Apples Studio Productions making sure nothing was pirated or leaked.

As amazing as the opportunity was at Apple, Alex was once again not feeling strong enough to be on the Hotline and often was having to miss volunteer shifts. Something was out of alignment and she had to make a decision.

Alex has since quite Apple TV+ and became a Supervisor on the Suicide Prevention Hotline in February 2020.

Every Monday through Friday on the graveyard shift Alex answers emergency calls on the Hotline, which include crisis’s related to mainly suicide and homicide. These calls can range from informational calls to tragic deaths. Alex has answered the phone nearly 500 times and in March, while still as a Supervisor in Training, she managed the National Suicide Prevention Lifeline, Teen Line, and the Disaster Distress Hotline on her own because nearly 40 counselors were quarantined due to a positive COVID testing in an employee.

On her own time, Alex has also been hand-making bracelets and giving them to people for free as part of the LiveLong Movement since November 2018. Over 700 bracelets have been sent around the world to people who’ve reached out to her directly in need of support. The bracelets are red to help alleviate self-mutaliation desires and have the words “Live Long” hand-stamped to represent the motivation to ‘live longer’.

From ages 17- 23, Alex struggled with anxiety attacks and used self-mutiliation as a coping skill. During a panic attack while driving one day at 23, Alex drove to a tattoo shop and got the worlds “Live Long” tattooed on her wrist next to her scars as a reminder to live long and not kill herself. She hopes these bracelets have helped others in ways like the tattoo does for her.

More about Alexandra (Alex) Eisner and LiveLong Movement at: www.LiveLongMovement.org