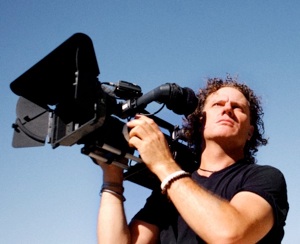 Peter Rodger grew up looking through a camera lens. As a teenager, the award-winning British director honed his skills by assisting his father, George Rodger, the renowned photo-journalist and co-founder of Magnum Photos.

After completing his education at England’s Maidstone College of Art, his skill with the lens made him one of the most sought-after talents in the European and United States Advertising Industry, shooting numerous car, clothing and cosmetics companies’ print and commercial campaigns in over forty different countries.

Peter has exhibited his fine art work all over the world and has won numerous awards for his filmed work including several Telly Awards.

Peter has penned seven screenplays – including “Bystander” – to be shot 2010; “Comfort of The Storm” – entering pre-production Autumn 2009 and “Publication Day” – In development.

After two-and-a-half years of filming across 23 countries, Peter has just completed producing and directing the epic non-fiction, documentary film entitled “Oh My God” – which explores people’s diverse opinions and perceptions of God.

Peter resides in Los Angeles with his wife and children.