Life Between a Rock Song and an Opera Aria, with Guest, Michael Amante on Life Changes With Filippo – Radio Show #191 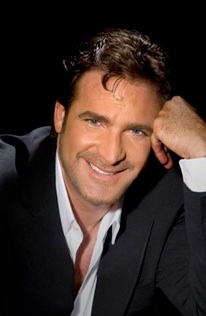 Singer The career of American tenor Michael Amante harks back to that of 1940s and 1950s star Mario Lanza in its broad audience appeal and in the way both singers easily cross the boundary between classical and popular music. Amante’s repertoire includes opera, the beloved Italian popular songs of the Naples region, Broadway standards, and contemporary pop. He has taken his place in a long tradition of Italian-American singers shaped by the operatic culture of their ancestral homeland, but he has been able to draw audiences from across the musical spectrum with high-energy presentations drawing on his experience in rock and musical theater. “I call myself the Bon Jovi of opera singers,” Amante told Nancye Tuttle of the Lowell, Massachusetts, Sun.

Michael Amante was born Michael Stobnicke in Syracuse, New York. His mother was of Italian background and his physician father was Polish-American. He adopted the more easily pronounced name Michael Amante when he moved to New York City and decided to pursue a singing career. Amante has refused to discuss his age with interviewers, but his MySpace web page stated that he was 44 years old in early 2007. Amante’s first exposure to music came when his father, who had a fine tenor voice, serenaded his mother to an enthusiastic response. “I wanted to do that, to make people feel that good,” Amante explained in his website biography. Neither parent encouraged his musical gifts, however; Amante’s father hoped his son would follow him into the medical profession, while his mother wanted him to study for the priesthood.

Amante sang in church choirs, and a teacher at his Catholic school helped him along by exposing him to a recording by Swedish opera star Jussi Björling. After attending Syracuse University, Amante transferred to the State University of New York at Oswego and majored in music and graphic design. He spent part of his senior year studying in Italy and teaching English to Italian students, discovering a side benefit of opera mastery – it attracted women. “Even when they weren’t into classical music, when I sang to them, forget about it,” he explained to Mary Kunz of the Buffalo News. Amante returned to the United States speaking Italian fluently, and he eventually learned several other European languages. After graduation Amante worked as a crisis intervention counselor during the day while performing with a rock band at night, traveling to gigs in cities along the New York Thruway toll road.

Even after achieving classical stardom, Amante continued to listen enthusiastically to hard rock and heavy metal music by the likes of the German band Rammstein. But the long hours on the road began to wear on him, and he actually found that singing opera was easier on his voice than full-throated rock screams. “Even though [opera] is louder, it’s easier to produce,” he told Chuck Darrow of New Jersey’s Bergen County Record. “When you sing rock, all you do is belt. You sing from the throat. Singing from the throat tires you out.” In the late 1990s Amante headed for New York City. He got nowhere with opera auditions and had to fall back on his graphic design skills, landing a job with the Ernst & Young accounting firm. Appearing at a benefit for a Manhattan high school, he feared singing in front of famed tenor Luciano Pavarotti – even more than with the various high profile individuals, including presidents George H.W. Bush and Bill Clinton and Pope John Paul II, who were to hear Amante’s singing in the coming years. But Pavarotti was encouraging. “He couldn’t have been nicer to me,” Amante told Darrow. “He treated me like a nephew.”

Amante persisted with his efforts, and in 2000 he approached powerhouse talent agent Sonny Grosso (a retired New York City detective who was the model for the character played by Roy Scheider in the film The French Connection) at a benefit dinner where Grosso was the host, asking whether he could sing a number on the evening’s musical program. “I asked him what he had in mind and he sang the most beautiful aria I’d ever heard,” Grosso recalled, as quoted on the website of the Clear Channel New Music Network. “I was knocked out and so was everyone else.” Grosso took charge of Amante’s career, placing him in prestigious gigs at the Algonquin Hotel and at the microphone of the legendary East Harlem Italian restaurant Rao’s. There, in 2001, Amante was spotted by influential music executive Charles Koppelman and was quickly put into the studio with veteran producer Phil Ramone to record Michael Amante, an album of Italian arias. Touring in support of the album, Amante received mixed critical reviews. Keith Powers of the Boston Herald complained of “missed entrances, off-key playing and singing, instruments that didn’t work, and bad pacing” in Amante’s appearance at Boston’s prestigious Symphony Hall. Still, the added exposure benefited Amante’s career significantly.

A Public Broadcasting Service (PBS) special was devoted to the singer in 2001, and he appeared at prestigious New York venues such as Lincoln Center and, in 2003, Town Hall. By the mid-2000s Amante was singing as many as four concerts a week in venues located primarily along the U.S. Eastern seaboard, although he had also ventured as far as Italy’s Altamonte Festival. Amante had a high public profile thanks to appearances at Connecticut’s giant Foxwoods and Mohegan Sun casinos, and as National Anthem vocalist at numerous New York-area sporting events. Amante was signed to the major RCA label for his 2003 album Tell Her I Love Her, which featured a mix of English- and Italian-language popular songs, including covers of Mario Lanza’s “Be My Love” and Frank Sinatra’s “All the Way.” Phil Ramone again served as producer, and Amante enlisted the aid of songwriting heavyweights such as the team of Barry Mann and Cynthia Weil as co-writers with Amante on “Last Morning of My Life.”

Amante returned to independent distribution for two further releases, Just for Christmas (2004) and the sacred Humbled (2005). By that time Amante had married an Indian-American physician and started a family of three children. He applied his enthusiasm for Italian gourmet cooking to preparing dinners at home to ease his wife Seema’s hectic schedule, and several of his original recipes were published in Pasta magazine. By 2007 Amante was looking to take his career to the next level with Broadway roles or the establishment of his own theater in Las Vegas, Nevada. His enthusiasm for classical vocals was strong. “When you hit a B natural with all the guts and glory, there’s nothing better,” he told Eric Zengota of the Bergen County Record. “I wish I could fly off the stage to the rafters. Chills go off like an atom bomb throughout the theater.”