Talk That Matters
Home Archived The Toltec Storytelling Art Form, “The Telling,” with Guest Koyote the Blind on Life Changes With Filippo #86 S2:E47 (2010)

The Toltec Storytelling Art Form, “The Telling,” with Guest Koyote the Blind on Life Changes With Filippo #86 S2:E47 (2010) 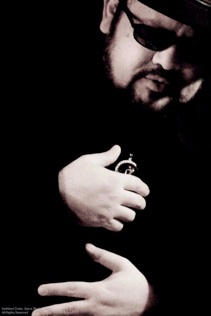 An exiled Salvadoran performance artist working in a disciplined, improvisational art form known as The Telling, which was originally created by Toltecs in tenth-century Mexico and preserved throughout Latin America by drifters who told crazy stories to the children. He has developed the Telling into a form that provokes in its audience uncommon emotions, strange cognitions, and ways of seeing the self that are not easily defined. Having studied philosophy at the graduate level, He approaches his art of The Telling in the spirit of the ancient philosophical tradition, disarming the mind and the personality in such a way as to release the being from the domination of habitual thought.

Koyote has been performing The Telling weekly in Southern California since 2005, in addition to appearances in Virginia; San Francisco; Grass Valley, CA; Mexico City; Sao Paulo; and San Salvador. Koyote’s Telling also has a presence online with a small but regular international audience, and has been featured in non-commercial radio and cable TV community programs. Koyote the Blind is a member of the Grady McMurtry lineage of the A .’. A .’.