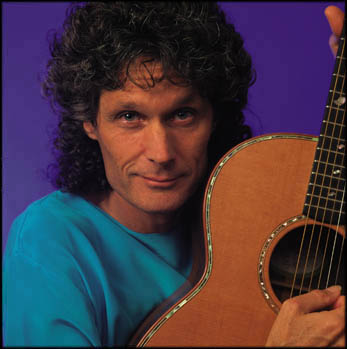 Bruce BecVar is a gifted multi-instrumentalist and composer. Having produced and recorded 14 CDʼs since 1986 on his label Shining Star Productions, BecVar is considered a veteran in the world of acoustic guitar. His Forever Blue Sky was on the top ten New Age Billboard charts during the 1990’s.

BecVar was also featured on the first Windham Hill Guitar Sampler. One of BecVar’s most successful musical projects is his immensely popular three-album series The Magic of Healing Music commissioned by Deepak Chopra. The series, based on ancient Ayurvedic principles, consists of music for Vata, Pitta and Kapha, each intended to balance the particular body “Dosha” for which it was named.

BecVar also spent many years as a guitar builder. His art and skill in the making and embellishing of instruments, along with growing recognition for his guitar compositions, brought him to Northern California in the early 70’s. He set up shop in Sonoma where he became well- known as a luthier, making one-of-a-kind electric guitars for such world-class rock h’ roll bands as The Who, The Peter Frampton Band, Led Zeppeiin, The Jackson Five, Earth, Wind & Fire and Carlos Santana. One of his guitars, ornate with exotic inlay and carving, now resides in the permanent collection of New York’s Metropolitan Museum of Art.

A seeker and healer as well as an artist, BecVar makes music for its effect on people’s lives. Listeners report feeling uplifted, soothed and joyful on hearing his music. “Composing and recording is for me a very spiritual practice,” says BecVar. “it’s an exacting process listening to the creative impulses of Spirit and being diligent about translating what I hear into a finished recording that captures
that original essence in its most undiluted form.”