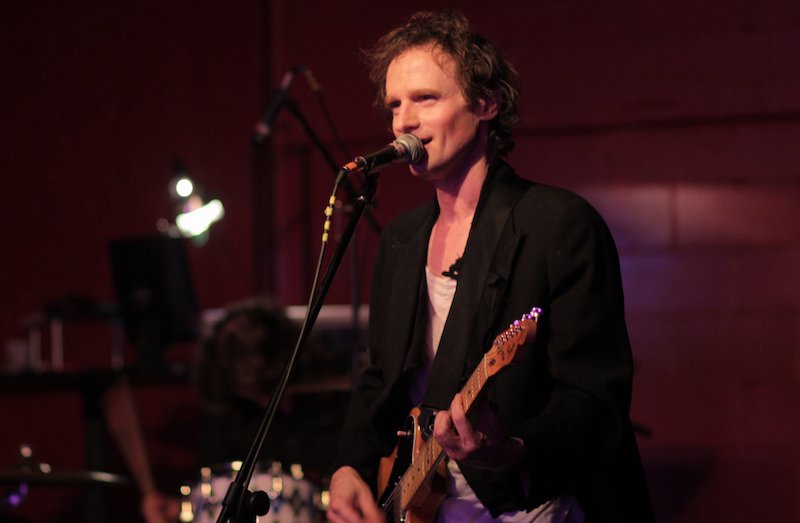 Underground songmaker and music artist Ethan Gold has just wrapped recording for his upcoming record, a double-album Earth City which explores themes of longing — for human connection, for romance, for nightlife in the city, and ultimately for connection to the threatened natural world.  To coincide with the first climate strikes, he released an advance video for one of the environmental songs from the album, “Never Met a World Like You,” and performed for the first time after his 2013 head injury, at three Los Angeles rallies in the final months of 2019.

During several years of convalescence, Ethan has been quietly making a lot of music, most recently, the glitchily gorgeous score to the Blumhouse supernatural thriller Don’t Let Go, released in autumn 2019 on Universal / Back Lot Music.  In late 2018 Ethan released a soundtrack to his brother Ari’s second feature, The Song of Sway Lake.  To match the tale of the decline of an aristocratic family and the golden light of late summer on an Adirondack lake, Ethan’s piano-driven score is an emotional force of water and silence, dreams and nostalgia.  The soundtrack album also features multiple renditions of Ethan’s original title song “Sway Lake,” including versions sung by John Grant and The Staves, arranged and produced utterly convincingly to sound like lost pop recordings from the late 1930s and ’40s.

Also released in 2018 while Ethan was not playing live shows was the much-praised naive electronic album Expanses (Teenage Synthstrumentals)  (“Primitive analogue instruments to their sound-warping limits” – Uncut; “Wildly diverting… by some wide-eyed, sun and acid-baked LA wunderkind” – Electronic Sound; “Records like these are my reason for getting into independent music in the first place” – Skope Mag; “I can say with complete confidence that I won’t hear anything quite as original… If you think it’s absurd to even suggest that a devotedly experimental, avant-garde artist could have such a reach, I would encourage you to have a listen to some of Lou Reed’s earlier solo work and reassess your opinion… More authentic than anything you’ve heard on FM radio in your life” – Vents Magazine.)  Gold also returned to early influences and completed an album of live covers of mostly new wave tracks, from New Order and Bauhaus to Of Montreal and The Knife, as Live Undead Bedroom Closet Covers(“Unhinged but weirdly compelling” – Uncut; “Brilliant cover versions” – Shindig!; “Rather fantastic” – The Crack).

Gold first stepped into public consciousness when he produced and arranged his friend Elvis Perkins’ blog-hyped debut Ash Wednesday, one of the most influential albums of the modern folk-rock resurgence.  After moonlighting as bass player in his brother Ari’s New York folk party band the Honey Brothers, and scoring his twin’s debut feature, the epic air-drumming comedy Adventures of Power, Ethan began honing his intensely personal style while living in a dilapidated flat in Los Angeles.  He released his debut art-rock album Songs From A Toxic Apartment in 2011 to underground acclaim (“Emotions delivered with an unfiltered, glaring legibility”- Pitchfork; “The most interesting record I’ve listened to in the past 5 years”- Rock N Roll Experience.)  He then began rolling out a series of videos from the album showcasing his visceral approach, which led him to side work as a video director.  He was working on a film score and his follow-up album when he suffered the head injury in 2013.  Through a long recovery, he now credits the temporary dissolution of his cognitive ability with an upgraded inner power and creativity, and a clarified mission: in a world that seems more and more combative, bringing sensitive people and quieter things —  music and poetry and the living earth — back into their magnificence.

Gold was raised in San Francisco, during the long extended hangover after hippie times in that city.  His father is Beat author Herbert Gold, and his mother Melissa was a collaborator and last girlfriend of legendary concert promoter Bill Graham, and was killed with Graham in a helicopter crash.  A childhood of constant change and chaos may have led Ethan to the unique way he approaches music as a balm and a life meaning-maker.  Today he lives and dreams songs, writing about half his music while asleep.  Earth City will be both a much-anticipated step forward for an artist whose path has been curved by inner impulse and by fate, and a return to the essential path of his original vision.  He jokes that his mission is to “make sensitivity cool again.”  But we can tell he’s actually not kidding.  He’s willing to be quiet enough to paint in songs the delicate details of the modern age, and willing to be strong enough to fight for the world as it could be.

More About Ethan Gold at: