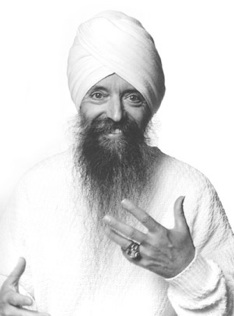 A fusion of the eastern-mystic-spiritualism, and enough western pragmatism to be completely relevant…

Guru Singh D.D., m.s.s. — is a 3rd generation yogi and master teacher of Kundalini yoga, meditation and humanology. A published musician, composer and author; he is a Minister of Sikh Dharma with a Doctorate of Divinity. But most importantly—to him—he is a family man . . . a human being—being humane. From a base in Los Angeles, Seattle, and India; Guru Singh teaches throughout the world with his wife Guruperkarma Kaur. Together they have two children, a son born in 1977 and a daughter born in 1983.

Members of Guru Singh’s family bloodline lived in India in the early 20th Century. His Great-Aunt met Paramahansa Yogananda – the first Yogi to teach in America – in Calcutta in 1916. Paramahansa authored Autobiography of a Yogi (Several million copies have sold in nineteen languages as a best-seller for fifty consecutive years in print.). She traveled with this spiritual master from India to America in 1919, and studied and served with him until his passing in 1952.

Guru Singh was born in Seattle in 1945 into this yogic – spiritual household. His father, a fine artist, was the son of an original member of Christian Science. His Mother, a musician, was a student of the mysticism of India and Tibet. Through this birth family, Yogananda became Guru Singh’s first teacher . . . setting the foundation of a spiritual life from the age of five with Krya Yoga. In January of 1969, Guru Singh (then 23) met and began a 35 year daily practice with the master of Kundalini Yoga – Yogi Bhajan. The first Westerner to wear the turban, he began accompanying Yogi Bhajan as he taught at Universities, spiritual centers and gatherings around the world.

Guru Singh also studied music from the age of five and while later attending the University of Washington he began performing as a singer songwriter in local clubs. In early 1966 Warner Bros.

Records heard his music, which was focused on peace in a time of war and the challenges of honoring real life in a time of superficiality. They signed him to a recording contract and moved him to San Francisco. Once there, his songs were soon on radio and TV nationwide as a voice for life and against the war in Vietnam. In late 1967, as pressure against the early peace movement mounted, Guru Singh shifted focus by moving from San Francisco to southern Mexico where he spent the next year training with maraakame masters in an ancient form of musical healing. This took place in the copper canyons region in a community isolated from the outside world.

Never giving up these musical roots, he today employs healing music in all his teaching. He has recorded many albums – CD’s of spiritual songs and mantras. One of these is ‘A Game of Chants’ he recorded with his friend and Grammy winner Seal. Guru Singh’s music is a fusion of all the influences he has experienced in life from the eastern-meta-sciences of mantra and raga to the western folk-rock to the indigenous rhythms of the outback regions.

Guru Singh’s spiritual teachings grew from two extraordinary events: an esoteric curiosity inspired – since birth – by his family’s deep connection to the masters of India; and the blessing of being ready when these teachers appeared. It ultimately constructed itself from eastern-mystic-spiritualism mixed with western pragmatism and is completely relevant in today’s world. It’s a path of extraordinary awakening, personal fulfillment and spiritual liberation enjoyed by hundreds of thousands of people he has reached around the world since 1971.

As Guru Singh says, “Our children are our most natural resource and it is education that prepares them for their world. At the present time we educate children in a style developed one hundred years ago by the minds of the industrial revolution. Because of the shrinking size of this planet, we now need to create people who relate to one another without competing with each other. We must teach children to truly know they are created in an extraordinary image.” Guru Singh is one of the Founding Directors of the Miri Piri Academy – an international primary and secondary school in Amritsar, India. Here, students from all over the world aspire to become global-citizens, learning from a values-based focus, and an academic curriculum taught without bias. Sopurkh Singh, their son, after graduating from the University of Southern California, taught at Miri Piri Academy for three years. Their daughter Hari Purkh Kaur graduated from Miri Piri Academy and then went on to graduate from the University of Oregon.

Guru Singh serves on the boards of several fast growth companies that are transforming today’s world of education, health, technology and community building. He is chairman of an International Council of Ministers and works with spiritual and religious leaders of nearly every faith to connect communities around the world with the human right to happiness. He is also working with a campaign for resolving the Israel – Palestine issues in the Middle East. He participates in an extensive medical study on documenting the effects of meditation & prayer on the brain with Dr. Andrew Newberg at the University Of Pennsylvania School Of Medicine.