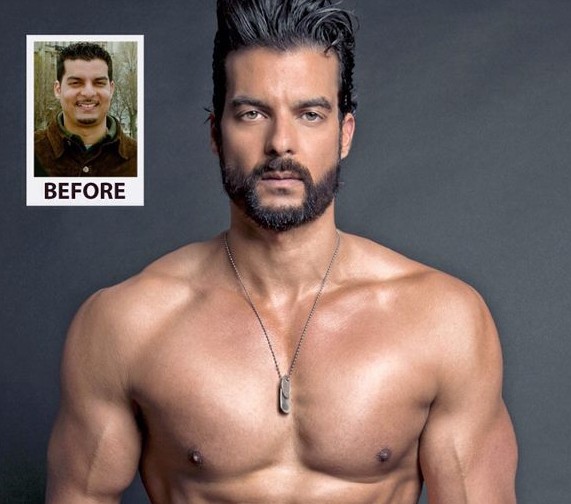 Stefan Pinto lost over 60lbs and became a male model. Some of his campaigns have been for Sears Eyewear, Estee Lauder’s Lab Series, Greek yogurt, Harley Davidson, and runway shows.  Stefan Pinto most recently invented a diet for people who use Facebook. What started as a simple status update in 2011, has now turned into a grassroots effort powered by social media. With over 28,000 photos of food submitted by participants, the C Diet® helps people to learn how food choices can affect their health — and ultimately their weight. Supported by over 20 major food brands, participants are motivated — and encouraged — to make healthier eating choices.

Raspin was born outside of Chicago, IL, and currently lives in the Hollywood Hills and has been living in the Los Angeles area for over 30 years. Raspin is a self-taught guitarist who has mastered the rhythm guitar. Shortly after his arrival in Los Angeles, he was signed by Marv Bornstein, A & M Records. “Hold On” was the first song to be placed, by Canadian artist, Richard Step, off his “Holiday in Hollywood” album, which was arranged by Grammy Award winner Jimmie Haskell. His musicial influences come from such great artists as: Louis Armstrong, Joni Mitchell, Harry Chapin, Cat Stevens, Dan Fogelberg, Bruce Springsteen, Bette Midler, Patty La Belle and Beethoven.

Raspin is a well-rounded, accomplished songwriter, vocalist and producer. His credits include: The opening track on the EAT’M Compilation disc, vocalist for the Wonder Years television series (“Catch The Wind” by Donavon and “Here Comes The Sun” by the Beatles), songwriter, lead vocal and producer of “Busy Sidewalks” for NBC’s Mark and Brian’s television series, and was the vocalist on “Bye, Bye Time”, a track submitted for, “Muppets In Space”. Raspin is the lead vocalist creating the voice-over character for K.C. Edgar, the movie villain. “Bye, Bye Time” was written and produced by Angela Lupino and Grammy Award winner Simon Franglen, producer and engineer of “My Heart Will Go On” (the love theme from the movie “Titanic” – Celine Dion) and most recently, “Avatar”. Raspin has represented such artists as Al Kasha, writer of “The Morning After”, and the legendary artist Richie Havens for movies and films. He also produced C.C.H. Pounder’s spoken word CD, “Smoke”, which actually made it to the ballot for a spoken-word Grammy.

Raspin has worked with such greats as: David Frost, Richie Havens, Jand Fonda, Daivd Holman (engineered all of the early hits for Olivia Newton-John), Larry Kuppin and Harry Sloane, owners of New World Pictures, Simon Franlen, The Cowsills, C.C.H. Pounder and The Williams Brothers. He has performed at some of the most prestigious clubs, to include: B.B. King’s Blues Club, Universal City and City Walk, CA, The Troubadour, Hollywood, CA, My Place, Santa Monica, CA, The Earl of Old Town, Chicago, IL and Orphans, Chicago, IL, to name a few.

Raspin released his first CD, “We Do What We Do” and is getting rave critical review. His ten track CD, produced by Raspin, Roger LaRoque, and mixed by Jeff Gold; and mastered by legendary Bernie Grundman himself. This is an eclectic mix of some of Raspin’s favorite songs, accompanied by top-notch studio musicians and the legendary background vocals of TaTa Vega (the voice of Shug Avery in “The Color Purple”) and European star, Jonnie Fiori.

In addition to his musical talents, he is also an astute businessman. For the last 28 years, Raspin has been the Publisher and Founder of Boulevard Publications, the second largest publication in Los Angeles. He retired from Boulevard in 2009 to return full-time to the music business, his true passion, where he now runs Boulevard Music Publishing, representing his catalog along with songwriters, composers and song stylists. With his success, he has supported and has made contributions to the community by creating “The Great Los Angeles Cover-Up” program, providing donated coats and warm clothing for the homeless. He continues to work closely with Dr. Lois Lee, Executive Director and Founder of the “Children of the Night” foundation. “Children of the Night” is committed to helping runaway children escape from prostitution and street life. He has contributed and supported such causes as AIDS Project Los Angeles, Project Angel Food and The San Fernando Shelter for battered women.