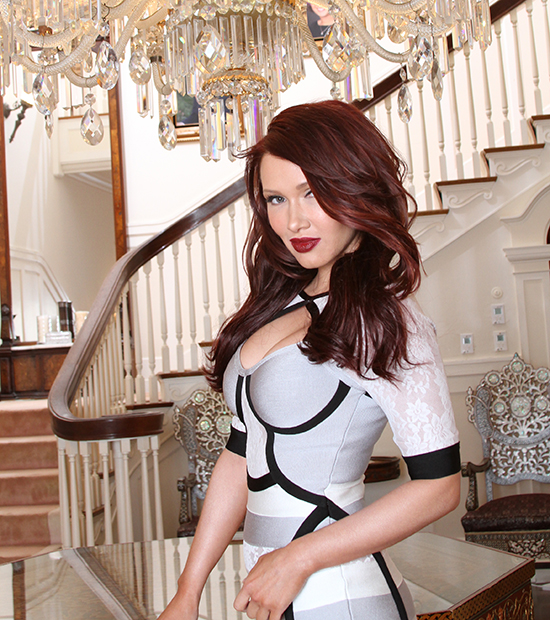 Born Emily Rose Morrison in Pittsburgh, PA this future starlet always knew she wanted to be an entertainer. Growing up in Youngstown, Ohio, Community Theater was like a second home to Emii. She took every opportunity to write songs and perform on the stage. Shortly after her 18th birthday, Emii hopped a Greyhound bus to New York City to pursue her dreams in the Big Apple with barely a penny in her pocket. “It’s safe to say my parents weren’t particularly thrilled with that decision,” she says. “But I knew what I had to do.”

While Emii worked in NYC comic book stores and photography studios by day, she would perform, write, and record in the studio by night. She recounts, “I’d work from 8AM until 5PM and then go straight to the studio. By the time a song was finished in the early morning, it was just about time for me to go back to work again!” Emii did anything and everything to further her career; she recorded with different producers, auditioned for television shows and theater, frequented open mic nights, fronted bands, and worked to perfect her craft, day-in and day-out. In an effort to keep balance in her life Emii took up martial arts training was her way of relaxing, and helped her maintain her focus.

After a few years of struggling as a “starving artist’, Emii finally met with an independent label that supported her vision and would ultimately change her life. It was then that she moved to Los Angeles, California to work with Slippery Eel Productions.

At the dawn of 2013, Emii signed with theatrical agent Media Artists Group and has been booking projects ever since. From her recent lead role in sci-fi features: Starship Rising and Starship Apocalypse, which brilliantly showcased her martial arts prowess and seasoned acting abilities to her upcoming feature film, Damage Control: First Strike. Emii has also captivated audiences in major venues and clubs around the world, sharing stages with the likes of Flo Rida, Iyaz, Inna, Robin S., and Mia Martina.

Described as “part Lady Gaga, part Amy Lee from Evanescence” by The Insider, this pop powerhouse is on a meteoric rise to the top. Emii is building a track record of success as an independent artist starting with the dance hit “Magic”, to “Mr. Romeo” Ft. Snoop Dog, to “Leaving You Behind” which quickly reached #1 on the Mediabase A/C Independent Artists chart most active new independent releases and spent an impressive 22 weeks on the Billboard-BDS A/C and Mediabase A/C charts, with 13 weeks inside the top 30.

Emii is currently on a dozen-city radio tour promoting her latest EP “Heart in a Box,” which features her single of the same name that hit #7 on Billboard’s Hot Singles Sales Chart and spent an impressive 16 weeks on the Mediabase Top 40 Pop Chart. The bombshell pop beauty is definitely paving her own way and has received rave reviews from the likes of The Insider, MTV Buzzworthy, Billboard Magazine, Rolling Stone Magazine (Middle East), MTV’s LOGO On Demand, Vibe, VH1′s Pop-Up Video, and shows no sign of slowing down.

Learn More About Our Musical Guest, Emii at her Website: www.emii.net