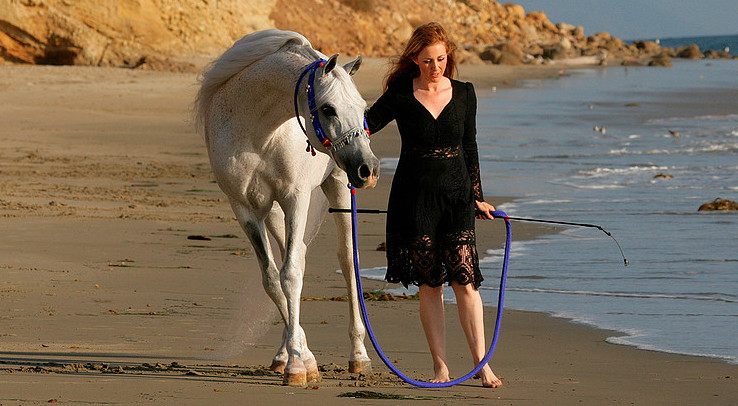 Born in Connecticut, horse-crazy child, Esta Bernstein, began her love affair with horses before she could walk. Her parents owned a few Thoroughbred racehorses and she remembers fondly visiting them at the track and farms as a small child.

Though her parents were not affluent, she was blessed to have riding lessons at a day camp during her early elementary school years. At the age of 10, she volunteered as a trail guide in Easton, Connecticut, and witnessed some of the inhumane treatment the rental horses were exposed to at the hands of inexperienced people. These patient creatures endured beatings with sticks, being kicked and pulled, and non-stop riding in the heat and humidity of the summer months. They rarely felt the caress of a brush, and never saw a warm bath or an occasional kind word.

At age 12, Esta’s family went through unrecoverable financial hardships, and were forced to move many times over the course of a few years. One move to Denver, Colorado provided Esta the ability to volunteer part time as an assistant to a pair of horse wranglers. Having no idea at the time what that was, she witnessed the cruelty and abuse that some of the horses went through. They would purchase horses cheap at auctions or killer feedlots, break them, and resell them. The treatment of one horse was particularly disturbing. He was a 3-year old Quarter horse stud colt, which the wranglers attempted to geld themselves. After tying the petrified creature to a tree, they proceeded to beat him with a chain until he was too afraid to move. They inexpertly and ineffectively tranquilized him, tied his legs together, threw him on the ground, and cut off his testicles with an ordinary kitchen knife. “I went to check on him the following day. I cried on his neck, feeling helpless in the presence of this beaten, depressed, and confused hurting horse. I was going to call the humane society, but upon my return, the horses and the men that tormented them had disappeared.” She never saw them again.

Esta had an epiphany. Her life’s mission was to save horses from abuse and neglect, and provide them with a place to live out their lives in peace and dignity.

Many years passed and the call of the horses would wait no more. In her early 20’s, Esta had an opportunity to move to California, the place she envisioned her dreams to manifest. She was offered a position as a groom for Bobby Frankel’s racing stable and worked for about a year, until a back injury prevented her from returning to that kind of labor-intensive position. Knowing that she needed to stay in California to see her dreams through to fruition, she found employment outside of the horse industry, and remained in the Los Angeles area.

After working for about a year, the desire to work and be around horses, motivated her to save small amounts of money over time for the purchase of her very own horse. That horse turned out to be an 8 year old, lame, Arabian stallion to do trail riding. Why would anyone purchase a lame horse to go on trails with? She knew she could fix him. He had severe ringbone (arthritis) in his right front pastern and the joint was almost completely fused. She was told by everyone she spoke with that he would not make it to the age of 15. However, after 2 years of research, she found a way to cure him, and now at age 33 he is serviceably sound, still her trail horse and sired two beautiful colts for her to show.

The horse she purchased was Caleyndar. Under her care and expertise, he became a world famous Arabian that was featured in Robert Vavra’s “Horses of the Sun” and National Geographic’s documentary “The Nobel Horse”. He was also featured on many of artist Kim McElroy’s portraits, note cards, and other Leanin’ Tree publications, as well as Ron Kimball’s images used for

screensavers and wallpaper. In 2004, he won the Arabian Horse Times, Most Classic Contest and his image can currently be seen in ads for Arabian Horse World’s web design services. Though his injury prevented him from ever being shown, he is still one of the world’s most recognizable equines in recent history.

Caleyndar’s injury lead Esta into the world of equine holistic nutrition and rehabilitation. Because of Esta’s well known success with healing Caleyndar, and dedicating over 20 years educating herself in these fields, she has become a go to person across the country when other horse owners need information on assisting and rehabilitating injured horses. Caleyndar’s notoriety has brought many equestrian contacts to Esta’s door. These contacts are now proving invaluable in her mission of rescuing and rehabilitating other horses in need.

Esta is also currently teaching an equine therapy program she designed entitled “Equalia Actualization,” that embodies the wisdom, knowledge, and spirit of the horses, combined with some of the theories of psychologist Abraham Maslow, which refers to an enlightened maturity characterized by the achievement of goals, acceptance of oneself, and an ability to self-assess in a realistic and positive way.

Equalia Actualization was developed after seeing a need to bring rescued horses and people together, so that we as a species could see the real value of horses. A rescued horse knows first hand what mental, emotional, and physical trauma is, and when allowed to engage one-on-one with people of all ages, they enlighten the way to the kingdom inside all of us. The horses of Saffyre Sanctuary, where rescues are treated like royalty, are the stars of this movie, we call life.

Additionally Esta is in post production of her documentary “Changing Horses” http://www.changinghorsesthefilm.com. As the producer/director of this film, Esta is uncovering the depths of the horse/human dynamic from people all over the globe. The film explores the personal stories of how horses change people, so people can change the world. Through interviewing prominent individuals in the equine community, we discuss some very complex issues regarding our human value systems, and how we can adjust our societal beliefs to ensure our survival as a species.