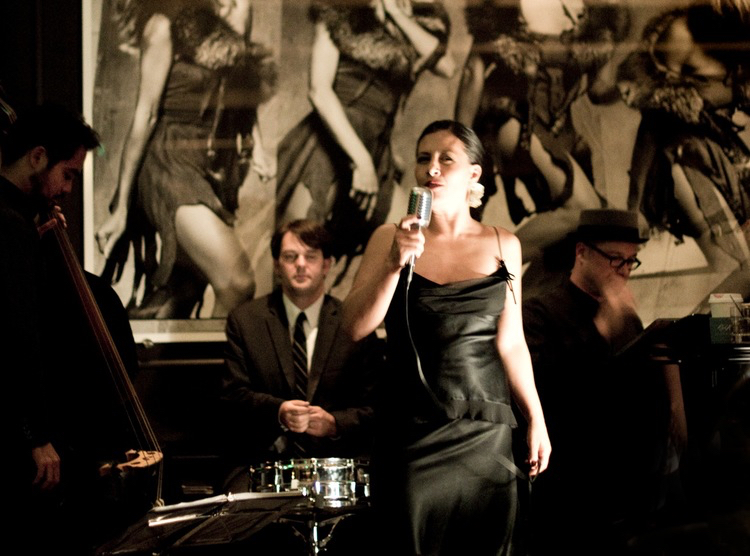 Maria De la Vega and the Wayward Five are a jazz and blues quintet fronted by a dynamic female vocalist, specializing in blending unique flavors with the classic music of the 20’s, 30’s,40’s and 50’s. The Wayward Five plays an eclectic variety of styles ranging from Ella Fitzgerald, Billie Holiday, Anita O’Day and Alberta Hunter. Their music appeals to a wide variety of palettes from the jazz and blues enthusiast to the casual listener. Their debut CD, Here’s to Life, was released in 2018.

Learn More About Maria de la Vega and the Wayward Five at www.waywardfive.com Maria De la Vega is a jazz and blues singer who, in addition to several other music projects, has headed her own band Wayward Five for the last 9 years. She has a signature style that is both powerfully energetic and lyrical, reminiscent of legendary voices such as Billy Holiday, Alberta Hunter, Anita O’Day and others. Utilizing her extensive classical training, Maria beguiles and elates her audiences with performances that that are lush and playful. Her velvet voice and generous presence have been described as rich, dynamic and glowing. She has been a regular feature performer at such notable venues as Wolfgang Puck’s American Food and Wine Festival at Universal Studios, The Bar and Lounge at Hotel Bel Air, The California Club, The Jonathan Club, Spago Beverly Hills, The Charleston and many other cabarets, nightclubs and restaurants in the Los Angeles and Southern California region. When Jamieson Trotter was four years old, he went into the den where his father had been practicing the piano, and began playing what his Dad had just finished working on. As the story goes, his father peeked into the room and just said, “I’m in trouble.” He started lessons for Jamieson the next day.

Jamieson Trotter attended school at California Institute of the Arts, learning from the great bass player Charlie Haden. He has also studied with Joe LaBarbera, Larry Koonse, and even the harmonically challenging Waddada Leo Smith (formerly of the Chicago Art Ensemble).

Jamieson’s hands have played small roles in a few movies. He was Val Kilmer’s piano hands in “The Salton Sea,” and Debra Winger’s coach for “Eulogy” with Ray Romano.

Jamieson has eclectic tastes in the kinds of music he enjoys playing. He has been a Temptation temporarily, composes and plays orchestral parts for Sergio Mendes and Brazil 66, and played with Mathew Morrison and Mark Salling of the television show, Glee. Jamieson is featured on piano on Salling’s upcoming follow up to his album “Pipe Dreams.” Recently, Jamieson began recording with Jon Farriss – drummer for INXS.

Carol Bach y Rita and Mark Winkler both have critically acclaimed jazz albums with Jamieson’s hands on keys. He is currently composing in a small room in Highland Park. Don’t disturb him. Gabe Davis first picked up an instrument before he picked up a pencil. He began his long love of music at the age of four, starting on piano. At age ten he started playing the electric bass in order to form a rock band for his 5th grade talent show. As his musical tastes expanded, so did his repertoire of instruments and Gabe gravitated towards the upright bass. He has since toured extensively in the United States, Canada, and Europe with several different groups spanning various genres. To Gabe, music is a way of life and he loves to share his passion with anyone who wants to listen. Mark San Filippo was born & raised in Los Angeles & began playing the drums at the age of twelve. During high school he was a member of the Los Angeles Junior Philharmonic. He became more seriously involved in jazz while attending Pasadena City College where he earned an AA in music & was awarded the Jazz Ensembles Award for outstanding contribution.