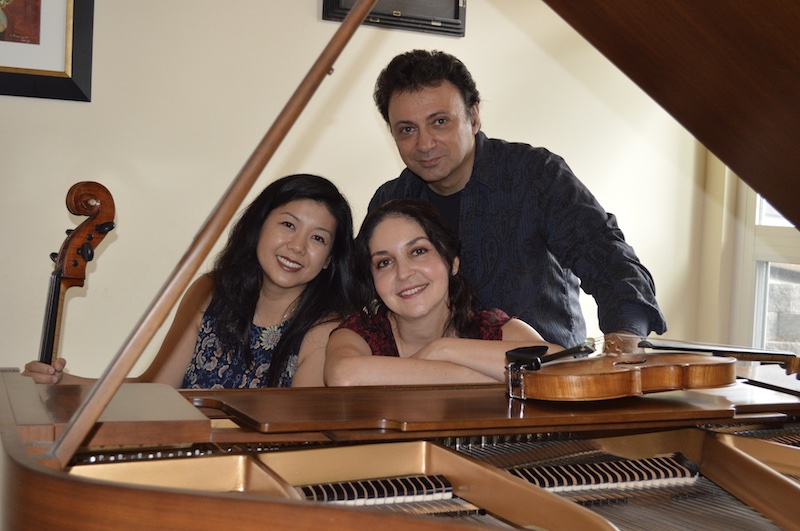 Winner of the Most Distinguished Musician award 2005 IBLA International Competition in Italy, The Elixir Piano Trio has appeared in performances in Europe, Mexico and the United States.

Founded in 2004, the dynamic Elixir Piano Trio performs both traditional and modern repertoire with classical, folk and jazz influences. Known for their unique and exciting interpretations, the Los Angeles based ensemble has dazzled audiences with their energy and sensitivity.

The trio has become instrumental in promoting works by Contemporary composers.

More About the Elixir Piano Trio at: www.elixirpianotrio.com

Mr. Chilingarian has performed in such prestigious venues as the Musikverein in Vienna, Teatro di San Carlo in Napoli, Teatro Farnese in Parma, Casals Hall in Tokyo, Birmingham Performing Arts Center in England. As a founding member of the Arioso String Quartet, he has toured Austria giving concerts in Vienna, Krems and Salzkammergut.

Mr. Chilingarian has been featured on the Sundays Live radio broadcast Classical 105.1 K-Mozart as well as on 91.5 KUSC “Spotlight on The Arts”. Mr. Chilingarian serves on the faculty of East Los Angeles College and continues to perform with the Elixir Piano Trio.

Dr. Nargizyan has been featured as soloist and collaborative pianist throughout the United States, England, Wales, Austria, Italy, Poland, Czech Republic, Bulgaria, Canada, Mexico and Russia. Her performances were broadcast on Russian Radio and Television as well as on Classical KUSC Radio. Dr. Nargizyan has performed as a soloist with the International Chamber Ensemble of Rome, the USC Thornton Chamber Orchestra, El Camino and East Los Angeles College Orchestras, and the Pasadena Community Orchestra. She has been invited several times to perform at Walt Disney Concert Hall as part of the Los Angeles Philharmonic Chamber Music Series.

Dr. Nargizyan is a dedicated teacher whose students have been prizewinners in many local and state competitions. In addition, her students have transferred to such institutions as USC and Cleveland Institute of Music. Dr. Nargizyan is currently a Professor of Music at East Los Angeles College.

She has appeared as guest soloist with the Pacific Symphony and USC Thornton Symphony among others, and as an orchestral player she has performed with LA Philharmonic and LA Chamber Orchestra.

She made her Carnegie Hall debut in June of 2010, as solo cellist in the production of Eric Whitacre’s
Paradise Lost. In Spring of 2011, Dr. Xu was again featured in the production at Disney Hall in Los Angeles. She currently maintains a private studio in South Pasadena, and serves as the String Chair of
MTAC Pasadena Branch.