Peace Angels and the Art of Peace, with Guest Lin Evola; and Musical Guest Tyler Crawford on The LIFE CHANGES Show #518 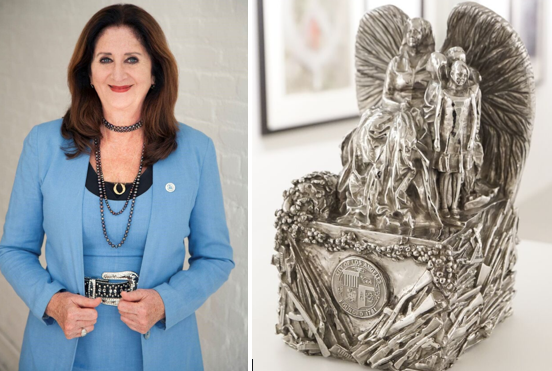 Lin Evola is an American Contemporary Artist who has used her career as a platform to bring attention to the disturbing proliferation of violence which occurs in our neighborhoods and among nations. Evola holds a Master of Fine Arts degree from San Francisco Art Institute and has had solo exhibitions in museums and galleries in London, Paris, Monaco, New York, Philadelphia, Chicago, Los Angeles and San Francisco. Art historians have declared her work to be on the level of Leonardo da Vinci, Joseph Beuys and Robert Rauschenberg.  Evola is the recipient of numerous honors and awards, including having been declared Artist Life Member of New York City’s National Arts Club.

In 1992, Evola’s decision to utilize her artistic skills to galvanize the public to take action against needless violence was actualized when she discovered that 1,000 children were being killed each year through the use of illicit guns in the Los Angeles area. It was then that she founded the Peace Angels Project.

Through the Peace Angels Project’s  USA Weapons Destruction Campaign, Evola requests surrendered weapons from communities and countries through law enforcement and government agencies, melts the weapons down and uses the melted metals to cast sculptures which she calls Peace Angels. Simultaneous to the weapons requests, she engages the media to transmit the message that the public should consider how to balance the need for protection against the desire for peace.

Since 2008, Evola has attended the closed meetings regarding Disarmament at the United Nations in New York City at the Biennial Meeting of States, Small Arms and Light Weapons. In 2012 and 2013 she attended the United Nations Conference on the Arms Trade Treaty in the company of 193 international Member States where she bore witness to a global effort to address the issue of illegal arms trafficking among nations. Evola was honored to be the only artist allowed in the 2013 meetings, and in April 2013, history was made as the United Nations General Assembly voted to approve the first international Arms Trade Treaty ever to be adopted in the history of mankind. The Peace Angels Project is an official NGO of the Unites Nations.

Over decades, Evola has created Peace Angel sculptures which range in height from one to thirteen feet and which reflect specific cultural indicators of regions throughout the world. Discussions are ongoing to create sixty four foot Peace Angel monuments, each of which is to be made from 1 million surrendered weapons. Two of those monuments are likely to stand in high-visibility locations in New York and California, and Evola has begun a project to create Peace Angels throughout Los Angeles.

More About Lin Evola at: www.peaceangels.com