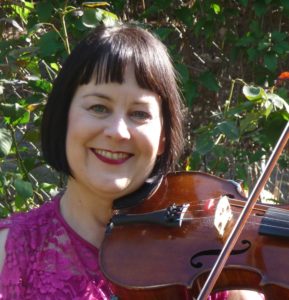 Karie Prescott – viola, began her studies in Bellevue, WA, with Richard Skerlong.  She is a graduate of The Curtis Institute of Music and the University of Michigan, where she studied with Karen Tuttle, Michael Tree, and Donald McInnes.  Chamber music performances have taken her throughout Europe and North America, including two “Music from Marlboro” tours and as the violist for Mikhail Baryshnikov’s White Oak Dance Project.
A member of the Los Angeles Opera Orchestra since 1991, she has frequently played in orchestras accompanying Andrea Bocelli, Placido Domingo, and Luciano Pavarotti.  She also records soundtracks for motion pictures and TV shows.  Formerly professor of viola and chamber music at Pepperdine University for twelve years, she also taught at Pacific Lutheran University and Tacoma Community College.
She is the founder and director of the Guemes Island Chamber Music Series, which gave its first performance in 2007.
More About Karie Prescott at www.facebook.com/karie.prescott.1
Share 0
Tweet
Share
Share
Share