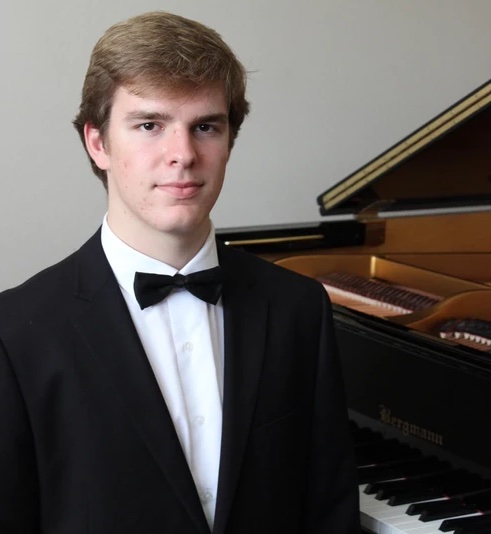 Ryan Wisniewski has been playing piano his entire life. Primarily focused on classical music, his repertoire ranges from Buxtehude and Bach to Scriabin and Rachmaninoff, with much in between.

Most recently, his performance of Prokofiev’s Suggestion Diabolique won the Gold Medal at the AADGT International Young Musicians Festival, with a winner’s concert this April held at Carnegie Hall.

With an undoubted influence from a strong Polish background, his performances of Chopin have received critical acclaim. Adam Gyorgy and Steven Spooner have described his Barcarolle as “well planned and greatly executed [with] ‘perfect’ moments! …This is very rare”.

His interpretations have also won 1st place in the SYMF Chopin Category in 2010 and 2021. Outside the Romantic era, he also performed in the pit band of musicals, being a part of the few musicians, hand-picked and invited. Legally Blonde, A Chorus Line, and The Addams Family were all well received.

Ryan also plays organ and can be heard playing at the USC Caruso Center in weekly masses. “I love the range and power held in each stop and note. Elevating polyphony to the next level, having to add the feet is a unique and tiring challenge yet sometimes I cannot remove myself from the bench.”

Currently, he minors in musical studies in piano at the University of Southern California, given the opportunity to study under notable figures such as Thomas Ladd, Lucinda Carver, Alan Smith, and Stephen Pierce.

None of this could have been possible without his teacher’s incredible and unmatched dedication and love of music, Margarita Markosyan.