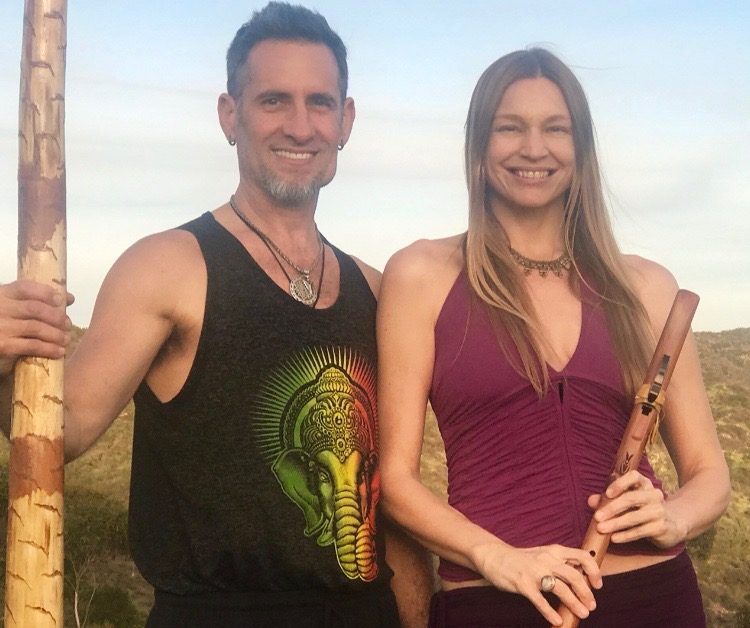 As a duo, they play indigenous musical instruments from many cultures around the world including didgeridoo, native drums, flutes and shakers, crystal and Tibetan singing bowls & gong, and stringed instruments. They also share original heart songs, prayers and mantras.

These healing energetic frequencies help to clear, re-balance and restore you into a more peaceful, meditative, and centered state of Being.

When we gather together invoking Spirit with the intention for healing and wholeness, the magic of the Universe answers our call and goes to work on our behalf.

Annmarie has been teaching yoga and meditation for over 15 years based out of Los Angeles’s beloved Topanga Canyon, where she is nestled in nature and wildlife, and sources strength from the quietness and peace of the native Chumash mountains.

Annmarie performs sacred music concerts and leads yoga and wellness retreats around the world. She has taught and played at many yoga and music festivals including Bhakti Fest, Bali Spirit Festival, Lightning in a Bottle, and Moksha Festival.

Originally from Michigan, she spent her late teens and early 20’s in a modeling career which took her around the world doing print work, catalog and runway in places like Paris, Rome,Vienna, Munich & Morocco. In her travels, she became interested in spirituality and had a spontaneous awakening experience which then shifted everything, and drew her to seek a deeper meaning in life.

It was a call of the Soul. And an incredible blessing in her life.

After leaving modeling, she walked into her first yoga class at Jivamukti Yoga in New York City, and felt that it was going to become an important and life changing journey. In her first yoga class lying down in savasana resting, a voice spoke to her and said “this is what you will do”.  Hearing this strong nudging from within, this began a powerful inward purification journey, and after practicing & studying intensely for a year, Annmarie left for India, Nepal & Thailand for a years journey on a Soul Pilgrimage. During her travels she learned sacred mantras with the brahman, visited holy temples and did purification rituals, did silent vipassana retreats, and began writing heart songs and mantras which she then brought back to America.

Upon returning to the US Annmarie moved to Los Angeles’ Topanga Canyon and completed her Yoga Works Teacher Training in Santa Monica CA where she then taught for  the next 5 years. She has been teaching at Yoga Desa in Topanga Canyon for over 15 years, and is writing her her manual for her own upcoming Teacher Training. Stay tuned!

Annmarie has songs in films, and most recently released her album Back To The Garden in 2016 produced with Ben Leinbach.  She is working on her new album titled Illuminate set to be released 2019.

Born in California, raised in Malibu, Evan has been a healing Artist for over 20 years. As a Soul Seeker from an early age, Evan had been on a Spiritual path leading him into a Life focused on Spiritual Development -Conscious-transformation, health and Well-Being. In combining multiple modalities; Evan draws from a Diverse Background of Cultural influences Integrating Bodywork and Energy work therapy – Hands on Healing, vibrational sound healing with hand made Didgeridoos, Native Flutes and Drums etc.

He draws from Various Shamanic and indigenous rituals with Nature and quantum physics in his Healing Practice supporting those in need physically, Emotionally and Mentally.. His intention is to assist those drawn to him Energetically for clearing, cleansing Strengthening and Spiritual-Empowerment Transcending Self- induced limitations and Opening up to embody Heart Centered love, Joy and Generate Positive Vibrations…