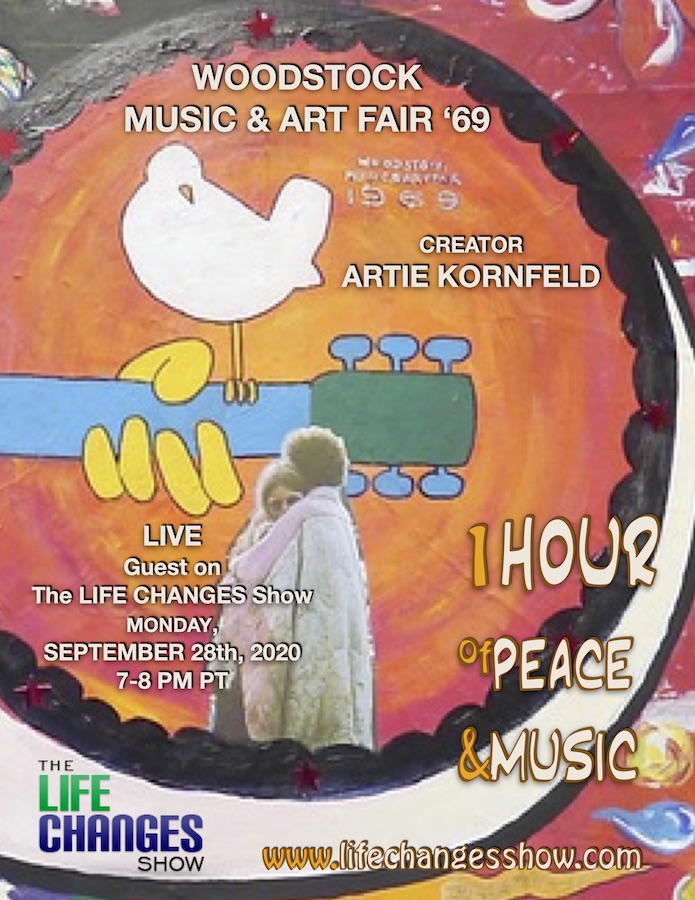 Join Us As We Celebrate Woodstock Creator and The LIFE CHANGES Show’s Special Guest, Artie Kornfeld

Born in 1942, Artie Kornfeld help define what it meant to be “young” in the sixties, with his music, and with what was to be his iconic and legendary creation of the Woodstock Music and Art Fair of ’69.

78 years later he redefines what it means to be “young” by what he is still doing and saying, like, “I’m still trying to figure out what I want to be when I grow up. On the other hand, I hope I never grow up. I don’t think anybody should.”

By the age of 24 he had written over 75 Billboard charted songs and participated in, namely by writing, singing, producing and/or promoting, over 150 albums, most of them, chart topping, award-winning, and iconic in their own right.

By the age of 28 he had produced arguable the most iconic festival our current culture has seen to date, none and lauded the world over now, simply as Woodstock.

Co-celebrating his Birthday and our 600th Show Anniversary almost a month after the 51 anniversary of Woodstock, Artie joins The LIFE CHANGES Show team on-air to talk about “life changes,” the things that changed, the things he changed, and some wonderful things that “haven’t changed at all.”

Broadcasting live, via BBS Radio Network to over 100 Broadcast Networks on Internet and Terrestrial Radio.

Get a reminder notification by joining our email list here: https://feedburner.google.com/fb/a/mailverify