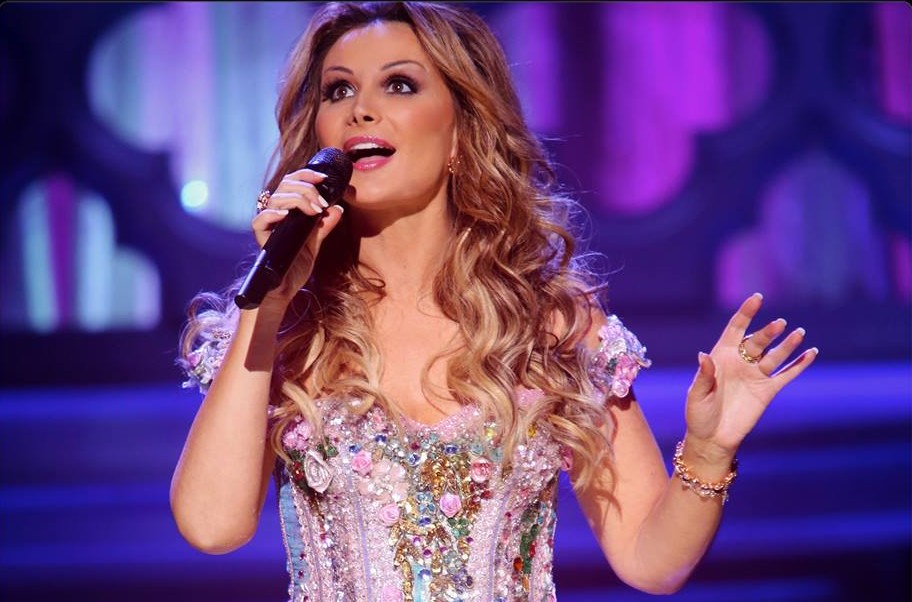 GIADA VALENTI
Born and raised in Venice, Italy, Giada Valenti started to sing and play piano at the age of seven. She began touring professionally with a band by age twelve. She studied piano and music theory at the Santa Cecilia music school in Venice and received her music degree at the G. Tartini in Trieste. She also studied jazz with American singer Dawn Mitchell.

In Italy she has won several important music awards like the prestigious La Grande Occasione and Festival di Castrocaro. While she was studying psychology at the University of Padova, she met the love of her life and moved to The Netherlands. She participated in the song contest San Remo New Talents in the World, a contest held annually for Italians living abroad and won with her pop ballad Solo Con Te (Only With You). This led her to a record contract with BMG Ariola in Europe and she had several hits in the charts. One of her songs was even used in a radio and television commercial for Piaggio-Vespa scooters.

When in 2004 her music got serious interest from a major record label in New York she decided to move to the United States. In December 2005, her self-released CD Italian Signorina was launched in the USA to great reviews. Italian Signorina featured the song Caruso that she performed on the red carpet at the Columbus Day Parade in 2005, 2006, and 2007 in New York City, broadcast every year live on NBC Television. She has been featured in the editions of this prestigious Parade in New York City, which is broadcast every year live on ABC Television, every year ever since.

Producer Sonny Grosso and musical director Phil Ramone selected Giada for a role in the Broadway musical Be My Love, based on the life story of tenor Mario Lanza. In 2008 iTunes has selected her version of the song Caruso as one of the 50 best songs in the Italian language. In 2005 and 2006, she performed her own original shows La Dolce Vita Swings and Moonlight and Romance, in sold out-theatres in New York. During these shows, she takes her audience on a journey across the Atlantic, singing the most beautiful Italian and American love songs. In June 2007 she made her debut at the premiere cabaret room in the United States: Feinstein’s at the Regency Hotel in New York City. With her show Tribute To The European Divas, featuring the music of such great female singers as Edith Piaf, Dusty Springfield, Shirley Bassey, Mina and Ornella Vanoni, she had become a regular performer at this prestigious venue, till it’s closing in 2012. In 2009 she made her debut in Atlantic City, at the Hilton Casino Hotel.

The Italian television reported several times about her successes in the United States. In 2008 the channel Sky Italia made an hour long documentary about her life as an Italian in the United States. In 2011 she was the protagonist in an hour long reality docu on Rete4 about her life and work in the United States. Over the years she was also featured in many interviews on RAI and Canale 5.
In the United States Giada’s talent and contributions to culture has been recognized by several organizations. In October 2008 Giada was named Woman of the Year by the Organization of Italian Charities In America. In February 2010 she was honored by the Commission for Social Justice of the Order Sons of Italy in America for being a good Italian role model. In October of 2011 Giada was awarded the Merit of Honor by the Borough President of Queens, NY for her outstanding cultural contribution to the Italian community in the USA. In April 2012 she was honored by the Saint Brigid Parish for he Distinguished Service in Promulgating the Beauty and Value of Italian Culture and Heritage. In November 2012 she was honored by the Italian American Labor Council for her Work, Achievements and my Life Dedication to Music. Giada is also a seven times recipient of a Grant of the NIAF Sergio Franchi Music Foundation.

Currently she is working on the post-production of her television special From Venice With Love, filmed partly in Venice Italy and partly in New York. The television special is expected to air on Public Television starting in August 2015 in support of a 40 dates tour to start in April 2016 in the USA. In this television special she will take her audience on a romantic virtual journey to her beloved Venice and she shares with her audience her memories of this magnificent city. In her show Giada performs some of the most beautiful love songs of the last 30 years.

Giada’s charismatic and charming personality is touching the heart of her fans all over the world. At her concerts she loves to share with her audience the stories of her life in Venice and in New York. With her honest and open spirit, her bubbling and funny personality is able make them laugh, make couples hold hands, make them sing-a-long and even sometimes have them shed a tear. It is her dream in life to promote with her music the beauty of her Italian heritage and her beautiful Venice. She likes to share her positive attitude and her strong believes. She loves to inspire young women to follow their dreams like she always did. One of her favorite quotes is from Walt Disney “If you can dream it, you can do it”. And she adds to that; “but be ready to work hard, smart and to make sacrifices”.

Learn More About Our Musical Guest Giada Valenti at www.GiadaValenti.com