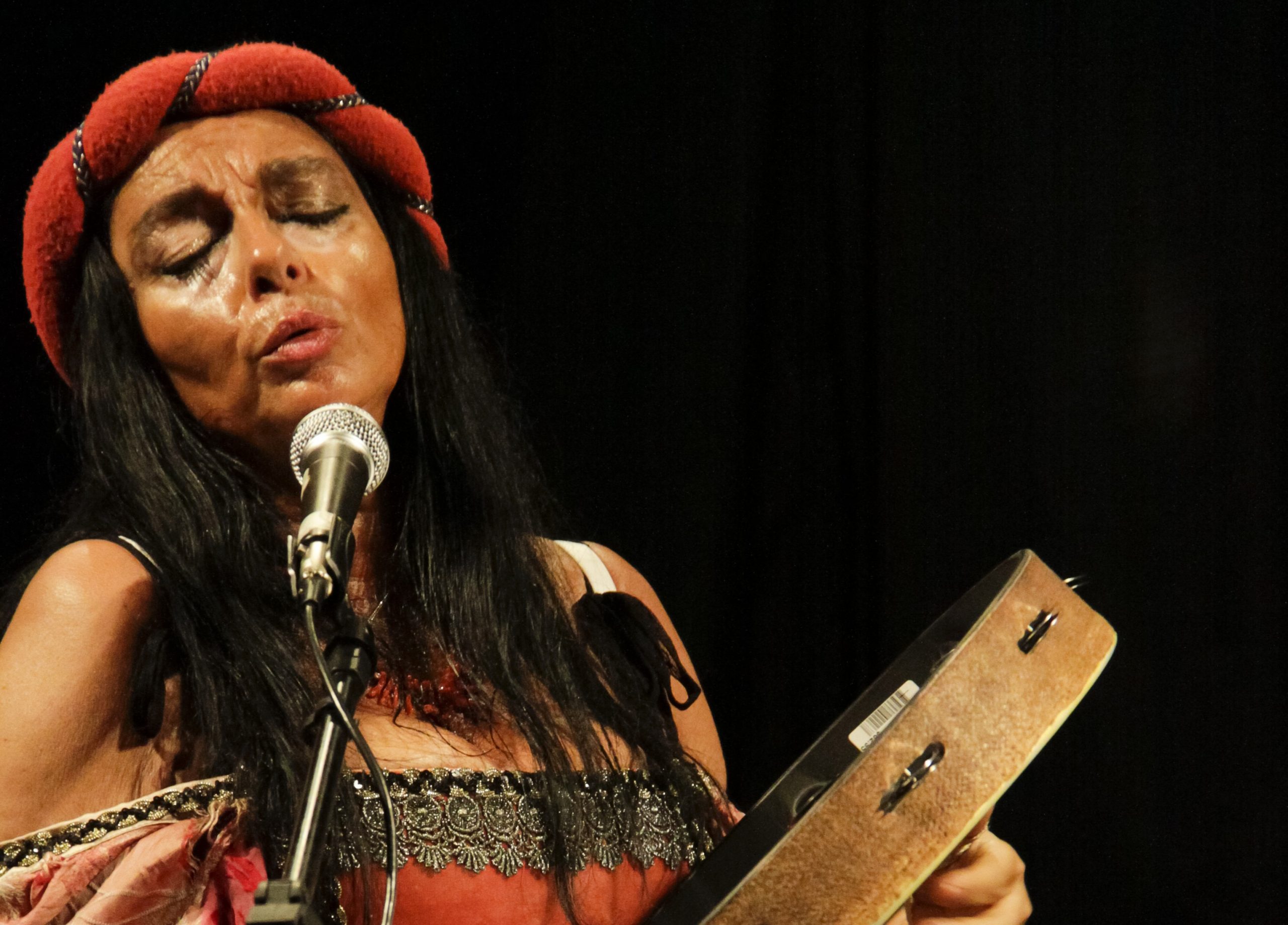 Alessandra Belloni is the Artistic Director, Founder and Lead Performer of “I GIULLARI DI PIAZZA”, an Italian Music, Theatre and Dance Ensemble who  is Artists-in-Residence at the Cathedral of St.John the Divine in New York City.  She is also the designer of a line of signature series Italian tambourines made by Remo, and of special brushes for tambourine with  Regal Tip. She is the only woman in the U.S. and in Italy who specializes in traditional Southern Italian folk dances and percussion  combined with singing that she learned in Southern Italy.

Her work as teacher and healer brought her to be the main feature of the documentary film about her as artist and healer TARANTELLA TRANCE DANCE (series Living Shamanis) by French American film maker Manex Ibar, to be soon released, and was also featured on  the Russian TV Travel Channel The Dancing Planet, her TV appearance include: ABC TV live in Chicago , the National Geographic documentary SPIDER SEX  on the Tarantella, WORLD BEAT on CNN, , GLOBO BRAZILIAN TV,  RAI UNO MATTINA,

Also featured on the PBS documentary, “LA FESTA” with The Voyage of the Black Madonna.

Alessandra holds her annual healing dance and percussion workshops in Tuscany, Italy and together with writer, philosopher, healer  ANGELO TONELLI and also from. She has spent many years also participating in authentic drumming festivals in remote areas of Southern Italy, held as rituals of purification in honor of the Black Madonna.
An award winning tambourine virtuoso, singer, dancer and actress, Ms.Belloni was born in Rome, Italy and is committed to preserving the strong and rich traditions of her culture. She has performed extensively with master drummer Glen Velez (her first tambourine student) and was invited by Nana Vasconcellos and Gilberto Gil to perform in PERC PAN ’98 in Bahia, Brazil.  Voted  on of the best female percussionists in the world by Drum Magazine, featured in Modern Drummer magazine and has written articles for Percussive Notes.

Her CD’s “Tarantelle & Canti D’amore” released by Naxos of America on 2003 has been considered the second best percussion CD of the year by DRUM Magazine and has received many favorable reviews from major press.

The CD “Tarantata: The Dance of Ancient Spider” (on the Soundstrue label) released in 2000, has received a wide critical acclaim and distribution. It was also nominated one of the best CDs of the year (2002) by Jon Parales from the New York Times and Dan Hackman from the Los Angeles Times, and won the Best World Percussion CD of the Year by DRUM Magazine.

Alessandra Belloni created a new World Music Sound with her group, using electronic music combined with acoustic, in her new show TARANTELLA SPIDER DANCE, with electric violin master Joe Deninzon . She has recently founded a Women’s percussion ensemble called DAUGHTERS OF CYBELE . She tours the world  her one woman show “Rhythm is the Cure” – also available as a duo with drummer  SERGIO BELLOTTI, (BERKLEE COLLEGE OF MUSIC).  With her ensemble from New York she tours across the U.S. and abroad, performing and teaching workshops in various Festivals and halls.

Alessandra Belloni has studied acting at H.B. Studios, voice with Professor Michael Warren, and mime and Commedia dell’Arte with Dario Fo (winner of the 1997 Nobel Prize for Literature) at New York University. She has worked in both theatre and film in New York – “Next Stop the Greenwich Village” by Paul Mazursky – and in Italy with Anna Magnani in “La Lupa” and Federico Fellini in “Casanova”. Ms. Belloni founded “I GIULLARI DI PIAZZA” – a company performing traditional Italian Folk Music and Theatre – with classical guitarist/composer John La Barbera in 1979 and was Artist-in-Residence at New York University for ten years. Fluent in Italian, English, Spanish, French and Portuguese plus Southern Italian dialects, Alessandra Belloni also speaks through her tambourine and drums.

Since then, she has created cross-cultural productions dedicated to Mother Earth, featuring the Thunderbird American Indian Dancers, and African and Latin American artists. For her achievements in music and theatre, she won the following  awards: from the ITALIAN ORAL HISTORY INSTITUTE IN Los Angeles, Fall 2005, Award for Italian American Woman of the Year in 1996 and the Community Arts Project Award from Lincoln Center for the Performing Arts as well as the Sons of Liberty “Citation of Honor” award in 2001. And special grant from the Carnahan Jackson Humanities Fund for a residency with the Women Studies program at SUNY Fredonia.

Jon Pareles of the New York Times wrote:
“Invocations and work songs, exorcisms and lullabies shared the program of RHTHM IS THE CURE in the Chapel of the Cathedral of St. John the Divine…. Driven by tambourine patterns so fast that the drummer’s hands became blurs. Ms. Belloni sang in an exultant voice. The songs blazed with an age-old momentum” .

Italian-born virtuoso Alessandra Belloni is established as a unique phenomenon, not just a percussionist,  she is an actress, lecturer, entertainer, a healer,  above all archetype….

With her left hande she  she uses a variety of techniques to produce  a wide range of timbers, incorporating thumb strokes, finger strokes, & slaps.

The Village Voice:
Alessandra Belloni is a force of Nature