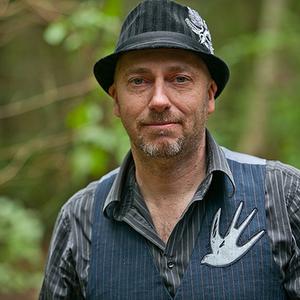 “If anyone can find the silver lining in a mushroom cloud, it’s this astounding, thoughtful filmmaker.” -The National Post

Velcrow Ripper is a Canadian Academy Award (Genie) winning filmmaker, writer,  sound designer and public speaker.   He creates powerful, cinematic documentaries that deal with the central issues of our times.  Occupy Love is the culmination of his epic “Fierce Love Trilogy” which began with  Scared Sacred, named one of Canada’s Top 10 movies of 2004, and winner of the 2005 Genie (Canadian Academy Award) for best feature documentary. It  continued with 2008′s award winning   Fierce Light: When Spirit Meets Action .

Ripper’s earlier films include  In The Company of Fear, a documentary on non-violent resistance to the “dirty war” in Colombia; Golden Gate Award-winning Open Season, about bear hunters and the activists who “hunt the hunters”; and the multi-award-winning non-fiction feature Bones of the Forest, (co-directed with Heather Frise) about the struggle to save the ancient forests of British Columbia (Best of the Festival, 1996 Hot Docs! Festival; and Best Feature Doc, 1996 Genie Awards).

Join acclaimed directorÂ Velcrow RipperÂ (Scared Sacred, Fierce Light) on a journey deep inside the revolution of the heart that is erupting around the planet, as he asks the question, âHow could the crisis we are facing become a love story?â

Occupy Love explores the growing realization that the dominant system of power is failing to provide us with health, happiness or meaning. The old paradigm that concentrates wealth, founded on the greed of the few, is causing economic and ecological collapse. The resulting crisis has become the catalyst for a profound awakening: Â millions of people are deciding that enough is enough â Â the time has come to create a new world, a world that works for all life.

The film connects the dots in this era of rapidly evolving social change, featuring captivating insider scenes from the Egyptian Revolution, the Indignado uprising in Spain,Â  Occupy Wall Street in New York, the environmental movement and beyond. Woven throughout the action oriented backbone of the film is a deep exploration of public love, and compelling stories of an emerging new paradigm. It features some of the worldâs key visionaries on alternative systems of economics, sustainability, and empathy, including Naomi Klein, Bill McKibben, Jeremy Rifkin, and bell hooks.