Follow the Funny to the Money, with Guests Topher Morrison and John Heffron on Life Changes With Filippo – Radio Show #142 S3:E51 (2011) 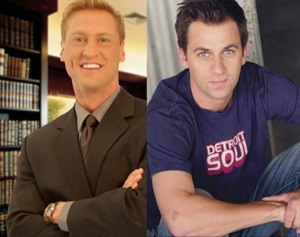 Follow The Funny To The Money…  Because “Funny Is Money”

Since 1989, “Topher,” as he is known to his friends, has trained tens of thousands of people worldwide, and is acclaimed as a dynamic presenter on a wide array of topics ranging from personal growth to sales training.  Dr. Morrison is internationally recognized for his columns on personal development, keynotes, and leadership training.  Innovative and prolific, Topher is the creator of the Music Trance series – music specifically created for the profession of hypnotherapy. He is the author of the best-selling book, “Stop Chasing Perfection and SETTLE FOR EXCELLENCE.”

Topher enjoys actively traveling throughout North America, Australia, and the U.K. teaching people the simplicity and significance of hypnosis/self-hypnosis and the role it plays in overall mind-body health.  His unique style is at once informative and entertaining, demonstrating Topher’s instinctive ability to convey the most sophisticated topics to his audience in an easy-to-understand manner.

Between speaking engagements, Topher resides in Tampa, Florida where he mentors students in their hypnotherapy practices.  He also volunteers his time to the non-profit agency, ACEER (Amazon Center for Environmental Education and Research) by conducting seminars at schools and organizations, sharing the importance of preserving our earth’s natural resources.

John Heffron burst onto the comedic scene during the prime of his college heyday. Although he did graduate in his home state of Michigan, Heffron’s priorities became clear when he began to skip night class to perform live stand up. His first gig was even on the University of Michigan’s campus at the Main Street Comedy Showcase. Since then, his comedy has evolved in a unique and creative fashion as he has grown from a fun-loving college student to a bewildered newlywed.

John’s attraction to excitement and his personal vow to never perform physical labor have both inspired and motivated his successful career. The endless list of credits comprises his impressive resume and highlights many significant accomplishments. He not only won the second season of NBC’s Last Comic Standing, but was also a finalist in the subsequent season. Heffron’s amusing and extensive material has earned him two separate half hour specials on the hit stand up show, Comedy Central Presents and he has become a regular on numerous VH1 satire series including I love the 80s: 3D, I Love the 70s: Volume 2, and My Coolest Years: My First Time. In addition to being featured on Thom Filicia’s Dress My Nest, Heffron has performed on CMT’s Coming to the Stage, NBC’s Late Friday, and Comedy Central’s Premium Blend. He has made numerous appearances on The Tonight Show with Jay Leno, The Late Late Show with Craig Kilbourne, and E!’s Chelsea Lately and 101 Craziest TV Moments. John is no stranger to live audiences and has taken the stage at several prestigious comedy festivals including the Just for Laughs festival in Montreal and the HBO Comedy Festival in Aspen. John even had the recent honor of being a celebrity roaster for KISS’ Gene Simmons on an episode of A&E’s Gene Simmons: Family Jewels.

From his early days as Danny Bonaduce’s wingman on Detroit’s number one morning show, Danny Bonaduce and the Q Crew, to one of his current roles sharing the screen with Courtney Cox-Arquette on FX’s Dirt, Heffron has hailed experience from many talented comedians. However, John’s endless innovation can easily be seen in his own comedy. His first live stand up CD, Kid with a Cape, debuted over ten years ago. As a result of his constant touring, his routine has developed and grown and two more successful recordings, Good Kid, Bad Adult and The Better Half, have been released. John repeatedly accomplishes feats that many comedians dream to attain. His New 1 hour Comedy Central Special airs July 18th. This will be his 4th Cd

As Heffron continues to pursue his ambitions and perform live comedy, his adoring crowd continues to multiply. Budd Friedman, founder of the Improv comedy clubs, stated that “John is a very good writer; he is so likeable,” and “all around appealing.” It is no doubt that Heffron is a well sought after performer for many Fortune 500 company events, including Mercedes, Frito Lay, and Johnson & Johnson. Any stand up patron can relate to this comedian’s diverse material that ranges from bar hopping adventures in his twenties to married life in his thirties. John Heffron’s youthful personality and cynical wisdom result in a witty combination that nobody can resist