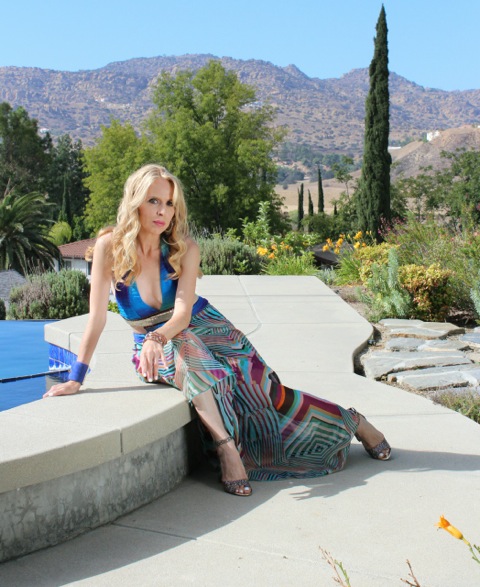 Dina Morrone, a blue-eyed, blonde, Canadian, was born in the remote northern Ontario city of Thunder Bay, situated on the northwestern tip of Lake Superior. Dina’s Italian Immigrant parents instilled in her the importance of being bilingual. This gift would one day go on to serve her well in her professional life.

From an early age, she was encouraged by her grandfather to write and perform.  Her first time on stage was at the age of four when, along with her older sister, she sang at the Local Italian Hall Annual Christmas Party for five hundred hungry, distracted, screaming Italians. The surreal moment left her with a burning desire to be in front of an audience. After performing in numerous school plays and talent shows, Dina joined a modeling/talent agency.  This brought her briefly to New York City, where she not only fell in love with the Big Apple, but also discovered a passion for designing clothes. After graduating from the Ryerson University Fashion Design Program in Toronto, Canada, she designed clothes for local rock bands and private clients. But Dina yearned to perform and soon embarked on a successful career in front of the camera, as well as at the microphone. She landed some high profile commercials for Kodak, RCA Records, and American Express, just to name a few.

While on location in Antigua, hosting a Travel Show, she met an Italian Film Crew, who encouraged her to take her talent to Italy.  She moved to Rome and in just three month, was chosen by FORD Automobiles, Italy Division, for a National Ad campaign.  She went on to do high profile commercials for Kodak, RCA Records, and American Express to name a few. This lead to more work in Film, Theater and Voice Over. She was cast in European and Italian/American co-productions.  Dina feels very privileged to have worked with the likes of Alain Delon, Klaus Kinski, Martin Sheen, Roberto Benigni, Inna Tchourikova, Alexander Gallin, Claudia Koll, Jacques Deray, Ralph Thomas, Tinto Brass, Elvio Porta, Bruno Corbucci and Norman Jewison.

Because of Dina’s bilingual abilities, RAI Television hired her to host a number of Culturally Informative television shows which aired all over the world. Her sultry voice was used by the Italian dubbing community to re-voice well over one hundred films, narrate documentaries and animation. One of Dina’s many highlights in Rome, besides meeting Federico Fellini, was the opportunity to work with American screen and stage actress Susan Strasberg, as her personal assistant during Susan’s “Intensive Master Acting Workshops.”

Since moving to Los Angeles, Dina has been actively involved with various Theatre Groups and continues to work as an Actress, Voice Over Talent, Writer and Theatre Producer. Dina is the Voice Over Announcer of the American Cinema Editor’s ACE Eddie Awards, the MPSE Awards for Outstanding Achievement in Motion Picture Sound Editing, the CAS Awards (Cinema Audio Society) for Sound Mixing, (HPA) Hollywood Post Alliance Awards, and Vaughan International Film Festival, to name a few.

Dina was invited by the Italian Consulate Office in Los Angeles to be the Master of Ceremonies for the Italian National Holiday – Festa Nazionale Della Repubblica, the MC at UCLA’S Royce Hall for the Orchestra Italiana del Cinema, an evening dedicated to the music of the Federico Fellini’s Movies and their Composers Nino Rota and Nicola Piovani, and the MC for the International Committee of the Los Angeles Philharmonic Association at the 61st International Benefit Ball Honoring the Consulor Corps – an evening entitled ITALIA, centuries of Art and Style – held at the Dorothy Chandler Pavilion. The FBI LA Office invited Dina to be the Keynote Speaker for the FBI Annual Memorial. This was a great honor for Dina as the event is a solemn tribute to those Special Agents of the Federal Bureau of Investigation who died in the line of duty. The event is commemorated annually at the Federal Building in Los Angeles.

Through countless short stories Dina has written over the years, she has given birth to a very entertaining and funny One Woman Show entitled, “The Italian in Me,” which had its World Premiere at the Globe Playhouse, in Los Angeles. She garnered rave reviews by critics and audiences for both her acting and writing. In June 2018 she received the Valley Theatre Award for Best One Person Show. She was also named by reviewplays.com, one of the Top Ten Best Actresses and the Los Angeles Woman’s Festival (LAWTF) presented her with the Inspiring Solo Performance Award.

The “Italian In Me,” went on to be performed at the Los Angeles Women’s Theater Festival, Marilyn Monroe Theatre, Pepperdine University in Malibu, Theatre West – WEST FEST Festival, Portraits of Humanity, a solo series festival, The Odyssey Theatre, The Italian Cultural Institute, The Feast of San Gennaro, in Hollywood, LA Women’s Club, Highways Theatre, The Santa Monica Playhouse in Santa Monica CA, The Electric Lodge in Venice, CA, The Potawatoni Casino in Milwaukee, and The Diesel Playhouse, in Toronto, Canada.

Dina’s full-length play, MOOSE ON THE LOOSE, a comedy about an Italian family and a Canadian moose, had its world premiere at Theatre West in Los Angeles, CA. The show was a smash hit with sold out shows. The show was then picked up and produced by Magnus Theatre in 2015, and Sudbury Theatre Centre STC, in 2017. Both theaters are in Ontario, Canada.

Since 2015, Dina has been the contributing editor and feature writer of The Eden Magazine and most recently she interviewed the legendary icon and artist, Gina Lollobrigida. The magazines aim is to create a better environment where we all live among other living beings in peace and harmony. It spreads compassion to all sentient beings. The magazine also supports artists whose work matches the criteria of the magazine.

More About Dina Morrone at www.dinamorrone.com