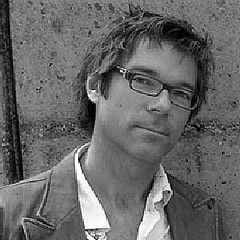 Known for his enigmatic approaches, Jacob has visually realized many different subjects that would not ordinarily find their way into the audio-visual medium. This has included an audio-visual exploration of blindness called ‘Beating Darkness’ for Austrian vision researcher Michaela Velikay-Parel, an after-life ‘Video Epitaph’ depicting the work of deceased architect Herwig Illmaier, and an annual report in the form of an audio/visual narrative entitled ‘Information Is Art’, which he performed live in 2007 with cellist Katharina Feldbacher at Carnegie Hall for the influential ‘American Austrian Foundation’, a George Soros funded off-shoot of the world-renowned ‘Doctors Without Borders’.

Other highlights have included a first-of-its-kind ‘live cinema’ feature entitled ‘LOOP Live Cinema’, where musical stage performances where orchestrated in tandem with dynamic visual sequences projected as dramatic narratives. He was invited to conceive and perform a unique live cinema spectacle, in January 2010, in collaboration with a 65-piece symphony orchestra in Salzburg, the birth town of Mozart.

Does the sun have the power to transform humankind?

In Solar®evolution, world-renowned German biophysicist Dieter Broers makes a compelling case, pointing to a wealth of scientific evidence that shows a remarkable correlation between increases in solar activity and advances in our creative, mental, and spiritual abilities.

We are in the midst of a dramatic rise in solar disturbances, which have the capability of disrupting the Earth’s geomagnetic field and, as a result, our global ecology. Broers, however, sees this not as an impending apocalypse but as the dawn of a new era.

Drawing on research from a variety of disciplines, he shows how erupting solar activity carries the potential to boost our brain capacity and expand our minds in ways we never imagined possible. Abilities now seen as extraordinary or supernaturalâtelepathy, extrasensory perception, and off-the-charts intelligence quotientsâmay soon become ordinary and natural and could very well help us solve the mounting global crises we are facing.

Humankind is going through an evolutionary leap, says Broers, and the process has already begun.