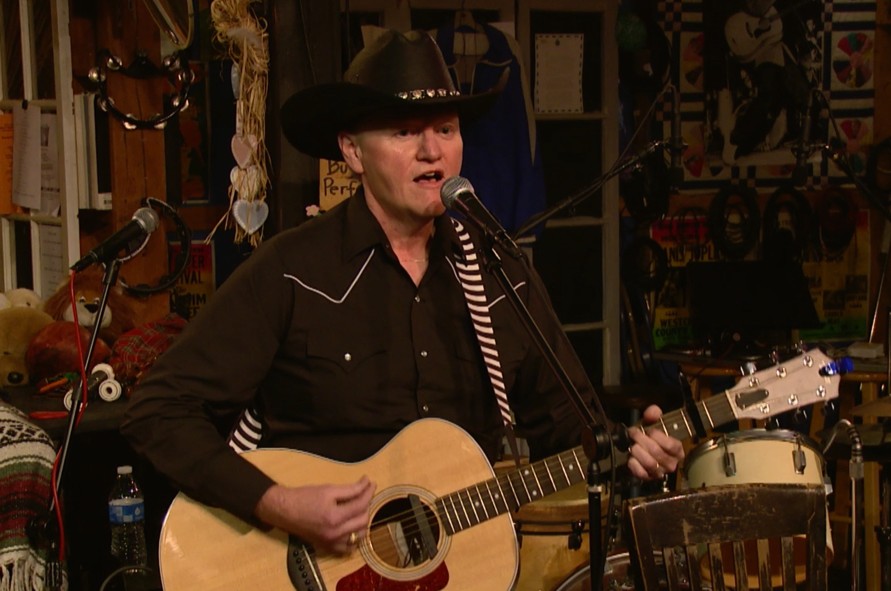 Grant was born in Jacksonville, Florida about 60 miles from the Georgia state line. His dad was a pilot in the US Navy, so the family moved around a lot during Grant’s childhood, living in Corpus Christi, Texas, San Diego California, Pensacola Florida, and finally up to Rhode Island.

Grant’s maternal grandmother was from the mountains of Kentucky, and even though she moved eastward, she loved that bluegrass sound for the rest of her life, and she encouraged Grant to appreciate it. She gave Grant a real gift – an appreciation for traditional American music.

Like most kids his age, Grant became infatuated with the Beatles, and he taught himself to play the guitar. But he was always good with a pen or paintbrush, and he seemed destined to become an artist one day. So after high school he dutifully headed off to art school. But music had already taken took hold of him, and he left art school to pursue it.

Despite the fact that his early work was primarily in the pop/rock genres, there was always something “country” about his songs. They all told stories, and painted pictures with words. After hearing from more than one friend and colleague that he should give American Roots a try, he finally gave it a try, and never looked back.

“It all got synthesized in my heart and mind during those years, and it changed me forever. I will never go back to writing songs like I did before. Don’t get me wrong: they were good songs, I hope, but they didn’t express everything that I was trying to capture. There is an honesty and immediacy to the kind of songs I am writing now. Sometimes they are painfully honest, but that’s what makes them connect with people: honesty.”
Americana is a celebration of American roots music, a unique blend of Bluegrass, Country, Pop, Rock and Folk music. The reviews are coming in, and they are nothing short of exuberant, and filled with high praise for Yellow Trailer.

This breakthrough album is available for digital downloads from iTunes, CDbaby.com, Amazon, and other places … and in physical CDs (and downloads) from www.cdbaby.com.

In his next album, Dust Bowl, Grant picks up where Yellow Trailer left off, and carries on down that same road, but with new twists and turns. According to the songwriter, “You can’t keep writing the same record over and over again; you have to reach beyond where you think you can go, and challenge yourself. So that’s what I am doing. The next album uses the great environmental and economic disaster of the mid 1930s as its context. It’s not a documentary, but the songs are set against that as the backdrop. That place and time is very special to me. The people are real, and what they went through was incredible.”

“I was drawn to this era because of Woody Guthrie, who captured so much of this time in his music, since he lived that time. For me the most interesting aspect of the Dust Bowl is the great migration of southerners and mid-westerners westward, to places like Bakersfield, California. They brought their traditional instruments and roots songs and sensibility with them, spreading my kind of music nationwide.”

“The most fun I have had on Dust Bowl so far are all of the collaborations with other artists. So far the list includes finger style acoustic guitar master Peter Janson, and Jody Quine, a Vancouver-based singer/songwriter. Guest appearances by several other Grammy nominated artists including flautist and world musician Wouter Kellerman of South Africa, and amazing New Age Indian composer and arranger Ricky Kej.”

Learn More About Our Guest Grant Maloy Smith at www.grant-maloy-smith.com