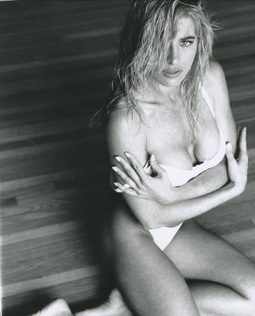 Never Judge a Book By Its Cover… No Matter How Beautiful and Sexy It Is Renowned Super Model Blue Britt has seen it all, and if not it all, then a lot more than most. From having left home at 14 and being married at 22 to a Rockstar… She has traveled the world, partied with A-Listers, and though she is still young, she has already experienced so much more than most people do in a couple lifetimes, if ever. And yet, you might be surprised what is important to her and what she really carries in her heart and what she consciously puts out into the world.

Though known as the Ex-Rockstar Wife of Jerry Dixon, Bass Player of the band Warrant. Blue, under a different name, made her own fame through many media, from modeling for the world’s most famous fashion houses like Victoria’s Secret, Guess Jeans, Calvin Klein and the like, to being featured in such famous and coveted Magazines as Swimwear Illustrated. Blue set the print fashion world on fire with a range of looks from girl next door, to rockstar, small town girl to sexy lady… Interesting to note that this is how she lives her life… A full range life!

Blue has appeared in many TV shows, commercials and films, like the soap, “All My Children” and “Dream On” for HBO, and many more. Unfortunately we cannot mention her latest TV project, though it’s going to be huge, until it is officially announced. But what we can say is that it is a Reality Show currently being tested in Canada on Slice and to be released in American in January. Oh, and the best part.

Stay tuned to hear about her popular and growing pole dancing classes, Body By Blue in Studio City, CA at Body Women Only.