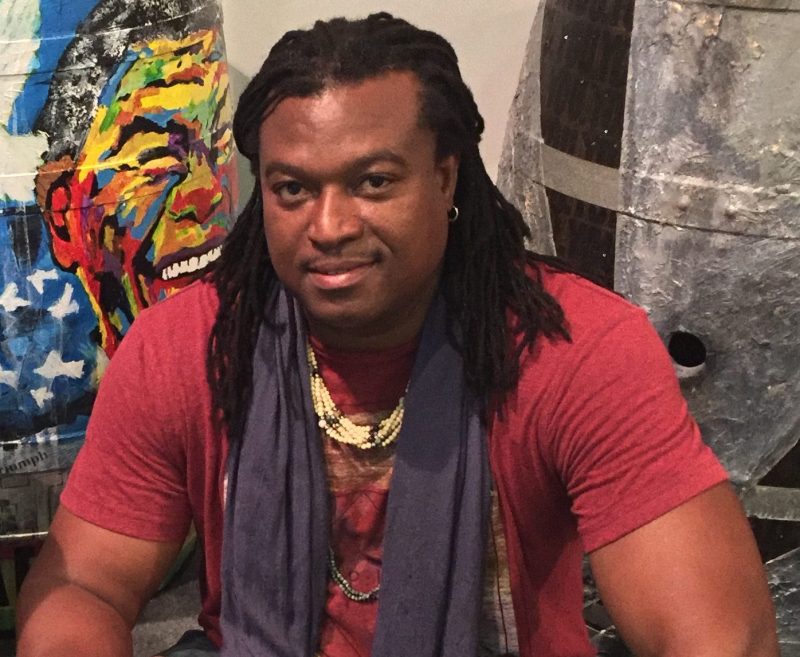 Jabu is a South African artist who has been exhibited worldwide. Brought up in the Apartheid era, he uses his artwork to express his experiences of what is often an unfriendly world, there by bringing a positive element into it. His artwork is unique with a twist of both urban and contemporary touch. The rich and vibrant colors capture diverse appeal from abstract work to artwork inspired by elements and tapestry from his African background. The choice of timeless materials from mixed media to oil, to maple wood and polished aluminum add to the value of his creations. This has created a growing demand for his signature style and contemporary perspective collection.

Jabu’ calls his work “Transformative Art” because he chooses themes and subject matter that inspire change. His focus is to create beauty and balance while bringing attention to causes he is passionate about.

Here are some of the cause driven series he has created:

Growing up in South Africa, Jabu loved the wildlife and nature reserves. He enjoyed seeing the animals roam free while his own freedom was limited. Over the years, Jabu became

aware that the freedom of the animals around the world was threatened. Recently, the need to protect the wildlife of our planet has become desperate. He chose to create the “Wildlife Series” because of his passion to save endangered animals. The last great animals of our earth are threatened due to human destruction of their habitats, pollution, fishing and hunting. His work captures the wonder and majesty of wildlife and their habitat. It is his hope that people will have a real call to action to do something today by supporting his work in turn supporting Non-profits who are fighting for this cause.

About the Nelson Mandela Freedom Series:

“I Started this series as my contribution to the Nelson Mandela Legacy. The legacy of Nelson Mandela motivates the human spirit. His message was and still is a global one. He had a profound effect on me growing up as a young man in South Africa. His selfless great spirit motivated me and my fellow comrades to join him for a fight to liberation against apartheid. His courage and bravery helped light the fire in me to fight for global freedom and peace.”

“I had the honor of meeting Mandela for the first time in South Africa after his release from prison and again in Washington DC at an event he was attending arranged by Jessy Jackson. I was there, doing the groundwork for the African National Congress Youth League. Before the triumph of Mandela’s organization there was fear of civil war in South Africa. The world watched this process unfold and there were rumors in the media that retribution would be sought and that mass acts of violence were eminent. What they didn’t count on is people like myself working around the clock to prepare for the “changing of the guard”. I was in DC on a program to study Peace and Conflict Resolution at American University to help with the peaceful transaction, from Apartheid to the new dispensation. My commander has left us and the world an amazing legacy of dignity, humanity, equality and most of all freedom. I am honored to create works of art to continue to preserve Mandela’s legacy.”

About the Transformative Food Series:

“Transformative Foods is based on my roots. Eating home cooked meals was a tradition. Moreover, home grown food was also common practice. As a child I think I was 9 or 10 I did a lot of jobs in the farms during school break. Living in the US Jabu discovered that Americans don’t often grow their own food. Food is mass produced, genetically modified, laden with pesticides and imported from around the world. The need for sustainability and eating food that’s organic is imperative.”

“I prepare my meals with fresh locally grown crop and home raised live stock mostly from farmer’s market, some in my own backyard. The dishes I prepare I use different colors of vegetables, this inspires my creativity. This series allows me to combine two of my passions, cooking and painting. Most importantly, I love to break bread with friends and family to foster great community.”

About the Abstract Series:

Jabu’s abstract work is about happiness. By creating and sharing his art, Jabu creates an emotional outlet for himself and others to help heal from life’s challenges. His unique approach and technique create a soothing atmosphere and captures the essence of, love, nature, life…with vibrant colors, intense forms and dramatic geometric shapes. This visual experience gives you an insight into his world.

Here is quote about Jabu’s work from: ArtisSpectrum Magazine
“Your work: Nuanced by color, variable degrees on depth perception, fluid color, and textures of abstract space, all of the paintings exhibit strength in the use of color and technique to express mood, emotion and milieu. With paint as the purveyor of vision, all of the paintings achieve poignancy through a unique perspective that is evident throughout the body of work. Resolute in style and perspective, I feel that the work will resonate well in New York and with our international audience”.