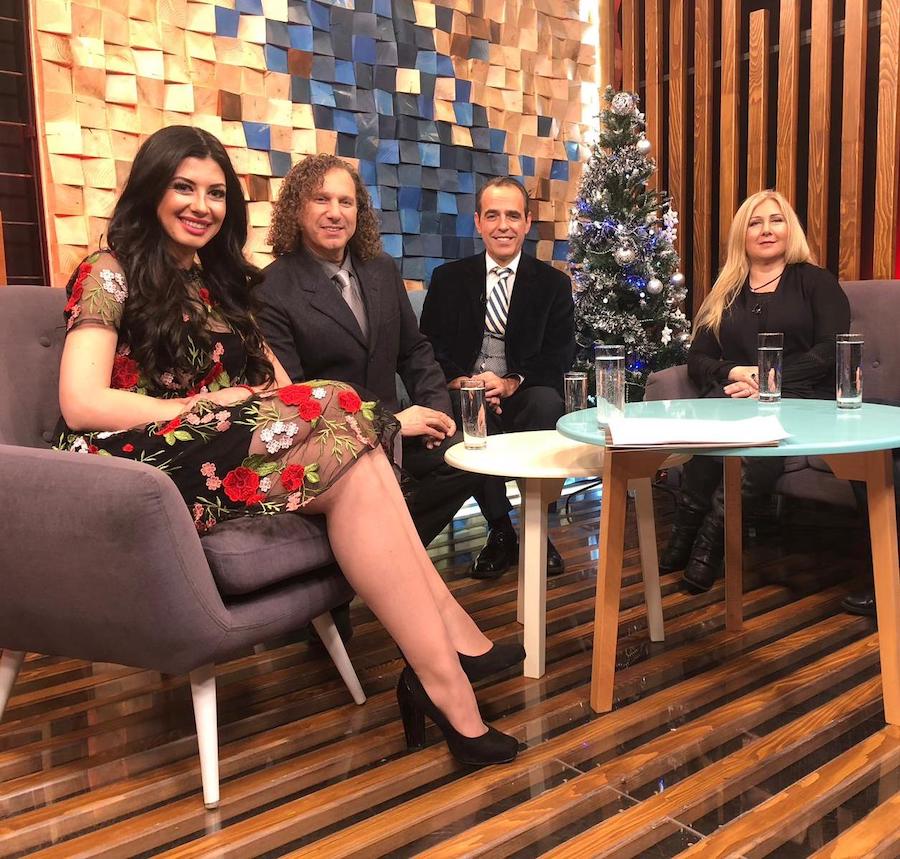 It seemed for a moment that I was ending the year in a perpetual state of confusion. I’m in a Country where the national languages spoken around me bare no resemblance to any language I grew up with, studied, or have heard spoken around me. Consequently, I am not understanding much of what is said around or to me. I too am not able to communicate my ideas, feelings, emotions, etc. nearly as much as I am used to and as much as I would like to.

Being a communicator by passion and by profession I have found it difficult and interesting at the same time. Two moments in particular made me reflect upon this even more than others.

The first moment was after being invited to appear on a national and international talk show along with my esteemed colleagues, Maestro Dino Zonic, Marina Manukian, and Samir Lokvanchich. It was fascinating how I sat there interested and fascinated in the conversation, and at the same time, not understanding a single word, except for when our names were mentioned and the names of the city, the Country, and the event wherein we will all be performing.

Then there was rehearsal this morning, wherein, after I had ended the program as Master of Ceremonies, I was called off stage to meet with the directors of the event, the Deputy Mayor, and a couple of others. Upon joining them, what seemed like a heated argument ensued. In what I recognized as similar to what is typified, as “Italian Style,” of speaking with hands, my name was mentioned several times and I was touched and “prodded,” in a sense, all the while not understanding what the supposed argument was about.

My mind went to, “they hated what I did.” “They were insulted by how I pronounced everyone’s names.” “I butchered their names on the most important and most loved, most televised concert of the year.”

My heart went to, “there must be some kind of change in the program and they are sorting it out.”

My mind turned that around and thought, “there’s no way they can change the program now, my whole speech has been translated from English to Bosnian, and has already been programmed to be subtitled on TV during the live broadcast.”

My heart said, “whatever it is, it’s going to be okay.”

My head said, “I’m supposed to be representing the United States, the Embassy, The Life Changes Show, and The Enlightenment Music Series, I have to do a good job.”

My heart said, “I am honored to be asked to be here and happy to be here.” That thought made me smile, and upon smiling, the group that was “arguing,” stopped and looked at me, and then interrupted their conversation to have one of them translate what was, “going on.”

Turns out, they are thrilled, with me and the work I’m doing. As for the mispronunciations, they said that I shouldn’t worry, “it’s cute,” they said, “charming.” My mind wanted to have a field day with that, but there wasn’t time. My heart…, smiled again.

But in an unexpected turn of events, the Mayor of Sarajevo will be joining me on stage this evening and they were trying to figure out when he was going to come out, where he would stand, how I would officially introduce him, and how to get to the TV Stations in time to get this addition in my speech programmed in.

I came to some wonderful realizations in those two moments in particular. In the first, the TV Host was all smiles through the pre-interview, which I appreciated. She had me repeat my name several times, because she wanted to pronounce it as close to the way I pronounce it as possible. And finally, and perhaps most importantly, I felt like the conversation was light, informative and very cordial. I didn’t understand many words, except when the questions directed to me were translated into English, but I had an overall feeling that a good time was being had by all.

In a similar way, in the later situation, if my ego mind had not gotten in the way, I might have sensed earlier on, that the overall energy of the conversation, though seemingly lively and anxious, was overall a good thing. In a sense, here, I have needed to “sense” more than I normally do. So much of my communication is by sensing, especially when I’m the one doing the interviewing. But I too often take that part for granted, maybe have been looking at it as secondary to the actual words I say.

Upon reflection, thanks to many moments like this in this past week, I had to honestly say, that life is maybe more of a perpetual state of confusion than not. And that because I say words and understand words, I generally go about my life thinking I know what’s going on. But the truth most likely is that there is so much more going on than the words I have understood, which have potentially lulled me into a false sense of satisfaction.

Potentially, thanks to these experiences and these reflections, perhaps being here, (along with all other kinds of experiences, fun, sharing and learnings), the greatest unexpected gift is this. I may never know all of what is going on at any moment of my life, and, assuming that I do, could potentially not serve me as well as finding a balance between what I “think” is going on, and what I “feel” is going on, may serve. That will be one of the things I carry into 2019 with me.

In a couple hours, I will literally be ending the program, from the National Theater and on National / International Television, with these words, “The Mayor of Sarajevo, Mr. Abdullah Skaka, the American Community, and the Sarajevo Philharmonic Orchestra, wish you Happiness, Happiness for our World, and most especially, Happiness and a bright future for Bosnia and Herzegovina. And with that, we wish you all, ( And the whole orchestra will yell out ‘Happy New Year,’ in Bosnian.”

And in that spirit, from my heart and from Sarajevo, Bosnia and Herzegovina, I wish you all Happiness, Happiness for our World, and most especially, as well, Happiness and a bright future for my Country, the United States of America.