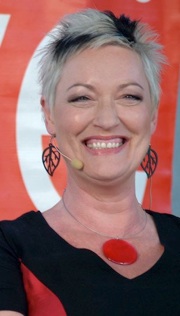 She is the mother of a teenager with special needs.

She is also a recovering and totally sober addict, in every area of her life.

She shares her own story and the methods she has implemented to move through the agony of pain to surface as a whole person.

Tracy began performing stand-up comedy in 1989 while working in Melbourne in sales and marketing. She’d been sacked and couldn’t get another job….. so she gave it a go.

How can we say this? Bartram’s a bit different.

At 30, she ditched a sales career for the life of a novice comedian.

She did three years of stand up comedy, touring Fringe Festivals, including Perth.

She moved to Perth, stormed the Corporate market, and fell into radio & TV.

In 1994 Tracy joined Perth station 94.5FM and, together with Fred Botica, she became part of one of the city’s greatest radio double acts.

After three years she was lured back home to Melbourne’s FOX FM and co-hosted the breakfast programme with Matt Tilley. “Tracy and Matt in the Morning” out-rated all other Melbourne FM radio stations for more than six years. Tracy left that show in 2003. She says that her time at Fox FM was an amazing time.

What she does best, is stage work; working live-and-on-her-feet with an audience.

With Raf Epstein at ‘The Sanity Clause’ Fed Square for 774 ABC Melbourne.

Her one woman, self-penned shows include:

My Generation: Through The Eyes of a Sixties Child (Melbourne, Adelaide & Perth)

In 2006, she and Tim Smith teamed up for ‘Tracy & Tim for Breakfast’ on Mix FM, which ran for two years.

These days, she is the regular replacement for Red Symons on the breakfast shift on 774 ABC Melbourne.

Tracy Bartram is a total professional, who works hard, calls a spade a shovel, and terrifies phonies. She’s at peace with herself and her place in the world.